On 18 and 19 July 2016 the Science Park at Comenius University was visited by ministers, state secretaries, and diplomats from all over Europe as a part of the Slovak Presidency of the Council of the European Union.

“The main priorities of Comenius University in terms of education and research include supporting the talent of young scientists, developing their scientific careers, and encouraging their participation in the Horizon 2020 programme. Freedom in research is at the core of our scientific activity; this is why we are doing everything to create a motivational and supportive environment for the creative endeavours of our best scientists. The Science Park, which has been established thanks to EU funding, is a result of this,” said Comenius University Rector Professor Karol Mičieta in his address.

The Science Park Director, Ján Turňa, added, “The implementation of the Science Park project will see us following a number of goals. Our main aim is to provide a space where scientific teams from all faculties can work together through the provision of a dynamic structure. Another goal is to raise the profile of Comenius University in the area of biomedicine, which is the domain of the faculties of medicine, pharmacy, and natural sciences. Actually, interdisciplinarity in research is one of the key principles which we are trying to implement at our university.”

The Comenius University Science Park does more than just work with various faculties at the university. Its openness to working with others in innovation has been shown by its cooperation with faculties from the Slovak University of Technology in Bratislava.

Guests could look into the laboratories of the university spin-off Geneton, a company which is open to both experts and the wider public. Dr Tomáš Szemes from Geneton’s scientific team spoke about the company’s activities, which include associated DNA tests and diagnoses for unborn children from the blood of the mother.

Guests also visited the pharmacy and pharmacology laboratory run by Professor Ján Kyselovič, where scientists were working on a project of implanting stem cells into the hearts of patients with ischaemic diseases. The unit primarily deals with regenerative medicine.

The last place that was visited by the guests was the FabLab creative studio – an open platform for designers, developers, artists, students, and the wider public which offers 21st century technology. Among other things, users can print various prototypes necessary for further development and research.

All of these areas showed guests that the Comenius University Science Park is able to connect the academic and scientific sphere with both the private and state sectors, which enables a quickening of the processes of innovation capacity development. 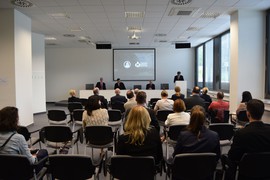 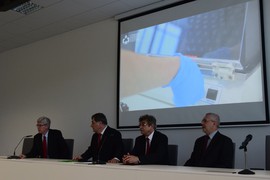 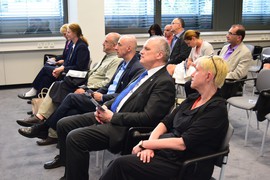 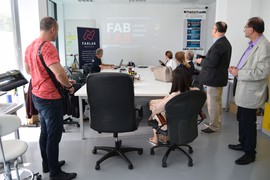