The Italian Minister of Economy and Finances visits Comenius University

On Monday 13 June 2016 the Italian Minister of Economy and Finances, Professor Pier Carlo Padoan, gave a lecture in the Rector’s Hall at Comenius University on the theme of “A Shared European Policy Strategy for Growth, Jobs, and Stability”.

Prof. Pier Carlo Padoan was welcomed to Comenius University on behalf of the Rector, Prof. Karol Mičieta, by Prof. Daniela Ostatníková, the Vice-Rector for International Relations, who highlighted the timing of his visit just two weeks before Slovakia begins its presidency of the Council of the European Union. She also pointed out that Italy was one of the most experienced EU member states in this regard, having already completed twelve presidencies.

In his lecture, Prof. Padoan presented a vision of economic components and policies which would ensure development and the economic stability of the EU, including the strengthening of fiscal policy, the Economic and Monetary Union, and the creation of the post of a European Minister of Finance. Regarding the lack of job opportunities in the EU and the need to raise employment, he said: “I want to see a Europe which creates jobs for young people; not just one-off opportunities, but jobs which exist naturally as a matter of course. This is particularly important in the area of long-term employment.” The fundamental pre-requisites for this are measures aimed at improving the national job markets in each member state and complementing them with European instruments.

Prof. Padoan is convinced that the EU has the necessary institutions and resources to achieve economic stability and growth in the union, particularly those which do not require a change in European agreements. In his opinion, this allows for adequately dynamic and flexible action. In the interests of achieving this goal, he also emphasized the importance of education and innovation.

He further pointed out that Europe is currently facing a number of challenges, with the greatest of these being the migrant crisis. There are also threats to security in the form of terrorism. However, Prof. Padoan also saw migration as a significant opportunity which the EU needed to develop a strategy in order to benefit from. He believes that Europe is able to accept people who are willing to integrate into society.

At the end of the event, Prof. Padoan received a Comenius University Gold Medal from the Rector, Prof. Karol Mičieta.

***
Prof. Pier Carlo Padoan studied economics at the Sapienza University of Rome and has held a number of academic positions at universities in Italy and abroad, including at the College of Europe, Université Libre de Bruxelles, the University of Urbino, Universidad de la Plata, and the University of Tokyo. He has also been a professor of economics at the Sapienza University of Rome. Nine years ago he was appointed Deputy Secretary General at the OECD, and in 2009 he became the OECD’s chief economist. He is a consultant to the World Bank, the European Commission and the European Central Bank. From 2001 to 2005 he was the Italian Executive Director at the International Monetary Fund. Since 2014 he has held the position of Minister of Economy and Finances of the Italian Republic.

More information about Prof. Padoan’s lecture will be presented in the September issue of Naša univerzita (Our University) magazine. 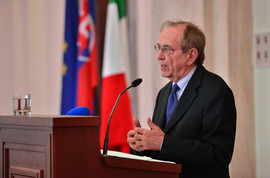 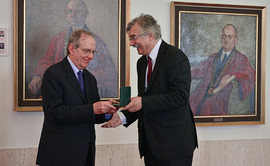