On Friday 19 August 2016 a commemorative event was held in front of Comenius University’s historic building on Šafárik Square in Bratislava to remember the occupation of Czechoslovakia by Warsaw Pact forces in 1968. In addition to Comenius University’s leadership, the commemoration included the participation of representatives of diplomatic missions to Slovakia, the Slovak Confederation of Political Prisoners, the Bratislava Self-Governing Region, the city of Bratislava, and other organizations.

Peter Sandtner, the chairman of the Slovak Confederation of Political Prisoners, mentioned the approaching fiftieth anniversary of the tragic events that took place in 1968 and then introduced Colonel František Martoš, who had been a witness to the events of 21 August 1968 as a soldier in the Czechoslovak army.

Comenius University Rector, Professor Karol Mičieta, highlighted the role of the academic community in truthfully and authentically researching and interpreting history, and providing lessons from these events to current students as well as to future generations. He said, “A nation that does not know its own history will be forced to live through it again. Let’s do everything we can so that we shall never have to experience such encroachments by a foreign power.”

The mayor of the City of Bratislava, Ivo Nesrovnal, pointed out the effects of the occupation and how the communist regime was affected by it through its inhumanity as well as the opportunism which damaged society and which still affects it to this very day. He made an appeal for the events of August 1968 to be remembered every year with a special day of commemoration.

The Chairman of the Board of Directors of the Nation’s Memory Institute, Dr Ondrej Krajňák, then presented some factual and historical information relating to the invasion of Czechoslovakia by Warsaw Pact forces. He emphasized that the armed forces which occupied Czechoslovakia in 1968 were much greater in size and in terms of military technology than those which had liberated the country towards the end of the Second World War.


On 21 August 1968, 15-year-old Danka Košanová, 29-year-old Stanislav Sivák, and 45-year-old Captain Ján Holík were shot and killed by the occupying forces. The commemorative event by the memorial plaque paid tribute to these three victims as well as all other victims of the occupation. 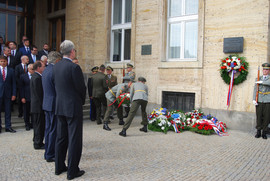 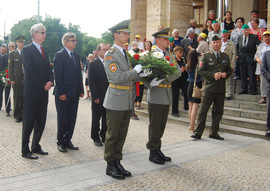 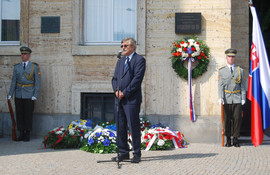