The Children’s University opens its doors for the fourteenth year

Comenius University in Bratislava and the Arena Theatre are preparing the fourteenth edition of the Children’s University, which offers day-time tuition to children ages from nine to fourteen, as well as the sixth edition of online study. The university’s rector and the theatre’s director held a press conference to announce the continuation of the university on 22 June 2016.

The Arena Theatre’s director, Juraj Kukura, expressed his joy at the fact that every year the Children’s University ignites so much interest among its young students. “This summer school is the connection of art with education,” Kukura said, adding that the lecturers speak to the students from the theatre’s stage. “However, it is also directly connected to science,” said Rector Prof. Karol Mičieta, “because scientific endeavour in Slovakia is an art in itself,” he said with a smile.

The Children’s University starts on 6 July with a matriculation ceremony in the Comenius University Auditorium. This ceremony will include the playing of the summer school’s anthem and the children attending will receive university grade books. The Slovak Minister of Finance, Peter Kažimír, will then give the first lecture, which will be on the topic of why money can ruin people’s character. In the following two summer months of July and August, around 340 children will learn about new topics every Wednesday in the form of university lectures.

As is tradition, the series of lectures will be enrichened by a voluntary programme of guided activities and workshops: favourites include careers and street dance workshops; excursions; creative studios with the Slovak National Gallery, the Slovak National Museum, and the Slovak Philharmonic; and a boat trip to the Danubiana Meulensteen Art Museum. Children will also have the opportunity to visit the army base in Levice, the nature school at the Planinka Recreation Centre, and the Volkswagen car factory. As with every year, there will be a great interest in the Question Time session with members of the National Council of the Slovak Republic. 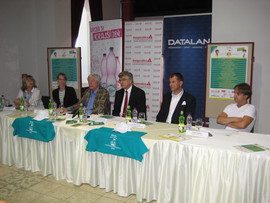