From 28 to 29 April 2017 there was an evaluation of the 22nd Štúrovo pero (Štúr pen) nationwide journalism award for high school and university students as a part of the 31st edition of Štúrov Zvolen (Štúr’s Zvolen) event. A significant award awaited Farmakoviny, a student magazine run by the Slovak Pharmaceutical Students’ Association in Bratislava, which is based at the Faculty of Pharmacy at Comenius University.

More than 200 young journalists who are authors working at high school and university magazines, including electronic magazines, met in Zvolen to be assessed as a part of the competition.

The category of “University Magazine” saw seven periodicals in the running in this year’s competition. Farmakoviny was assessed by the expert panel to have taken on the advice from previous years and to have made the most important qualitative steps. Thanks to this, the magazine received the Zlaté Štúrovo pero (Golden Štúr Pen) Award, which the panel awarded for the long-term attainment of quality, as well as the Nadácia Čisté slovo (Pure word foundation) Main Prize. 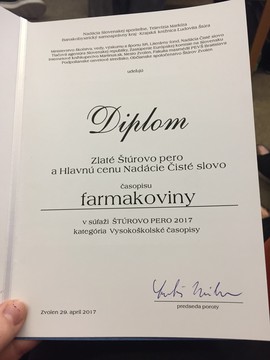 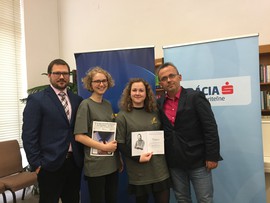