The introductory plenary session, which focused on the direction of tertiary education in Slovakia, was opened by an address given by the Vice-Chairman of Comenius University’s Academic Senate, Róbert Zsembera, a student of the Faculty of Education. “Students, teachers, and scientific personalities recognized both domestically and abroad are the university’s driving force. Quite rightly we are a proud part of this great mechanism. All of us, representatives of the student community at both a faculty and university level, must be aware of this pride and the importance of defending the interests of those who elected us and the whole student community. We believe that today’s meeting will be a contribution to the further development of Comenius University in Bratislava,” he said.

An address was also made by the Minister of Education, Science, Research and Sport of the Slovak Republic, Professor Peter Plavčan, who talked about current legislative and conceptual priorities and their impact on the student community. He also clarified some aspects of the educational reform currently being prepared which will significantly affect universities, primarily in the area of accreditation.

The minister’s address was built upon by Comenius University Rector, Professor Karol Mičieta, who focused on the university’s current direction. “Let’s not separate learning from creative activity,” he pleaded, raising the need for connecting the educational process with scientific endeavour. The university is a significant educational and research institution with a notable presence in the sciences in Slovakia.“ A good university needs to be primarily an autonomous one,” the rector emphasized.

The chairman of the Comenius University Academic Senate, Professor Daniel Ševčovič, praised the level of this sort of discussion and meeting, which gives a space for Comenius University students to meet in one forum and a constructive platform to discuss problems at each faculty and find solutions.

The CU Convention programme included two sections discussing studies and the internationalization of Comenius University and social matters and the university’s corporate identity. The aim of both sections was to provide information and an opportunity for discussion, and to reflect upon the current state of affairs and offer solutions in the form of section outputs.

Photographs of this event can be found on the CU Facebook page.

More information about the CU Convention will be provided in the April issue of Naša univerzita magazine. 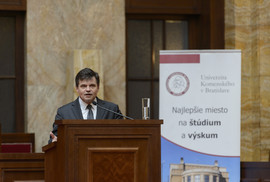 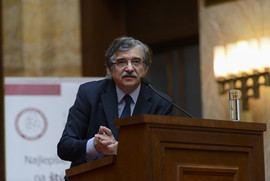 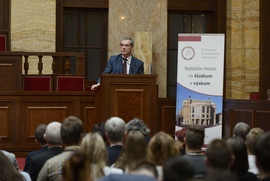 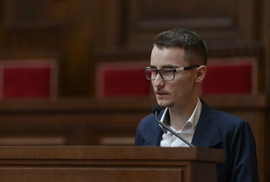