In answer to the expression of concern over the current events in Turkey, including the lack of respect for academic freedom and the dismissal and persecution of thousands of professors and teachers at partner universities following the unsuccessful coup attempt in July 2016, the Turkish ambassador said that she hoped that there would be a stabilization in the academic environment which would allow the return of a considerable number of professors and other teachers to their academic positions once security concerns had been resolved and after the end of the state of emergency.

The ambassador and adviser expressed an interest in preserving a balance in the reciprocity of exchanges of Turkish and Slovak students, which has been considerably affected by the concerns of Slovak students and their parents given the security situation in Turkey and the presence of terrorism. They also presented the possibility of awarding scholarships from the Turkish government. 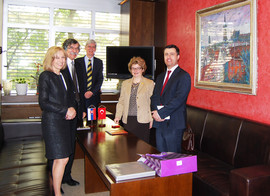