On 12 April 2017, the Comenius University Rector, Professor Karol Mičieta, welcomed the Ambassador Extraordinary and Plenipotentiary of Ukraine to Slovakia, Yuriy Mushka; the ambassador had presented his credentials to President Andrej Kiska on 8 February 2017. The ambassador was accompanied on his visit to the university by the First Secretary in the Ukrainian Embassy, Svitlana Honcharevska.

The rector and the ambassador discussed the possibility of establishing a Ukrainian Section at the Department of Russian and East European Studies at Comenius University’s Faculty of Arts should there be an indication of interest from students; Ambassador Mushka offered his help in providing a Ukrainian lecturer for such a position.

The rector told the ambassador about Comenius University’s participation in an upcoming summer trade show targeting high school students in Kiev and Lvov with the ambition of presenting the university as a study destination for Ukrainian students. The two men agreed on cooperating together in identifying study programmes which Ukrainian students might be interested in.  They also discussed the working relationships between Comenius University scientists and their Ukrainian peers, which are undertaken on an individual basis, and cooperation in the literary translation area (for instance, as a part of the current EU project focusing on the literatures of those countries forming the Eastern Partnership).

As the vice-president of the Danube Rectors’ Conference, Professor Mičieta also informed the ambassador about the conference’s activities; the rector of Uzhgorod National University, Professor Volodymyr Smolanka, is also a participant in the conference. 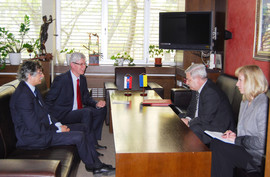 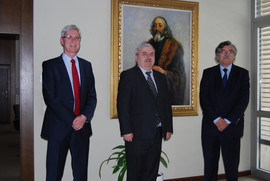