A New Development at Comenius University: Cinema for the Discerning Viewer

Kino Campus is the name of a project by Comenius University in Bratislava which is aimed at discerning cinemagoers and has been running since the end of April 2017. There will be twenty screenings of European films in the Auditorium of the Evangelical Lutheran Theological Faculty at 8 Bartókova Street until 1 July 2017.

The initiator of the idea was the faculty’s secretary, Samuel Láska, who approached the Film Europe Media Company. “After having invested in technically developing the auditorium, we reached a state where we could screen and provide quality sound for a small cinema,” said the faculty’s dean, Associate Professor Ľubomír Batka. “Kino Campus is the name of our project and we wanted to roll it out during the summer semester. Due to enthusiasm for the project on both sides, things really got moving,” the dean said.

Kino Campus is designed as a film club. Films of European origin tend to appeal to discerning viewers. The films are chosen with consideration to the place in which they will be screened.  “It is important for us that deep reflections on life are expressed so that the beauty of cinematographic art is captured and the beauty of the world is shown. Our vision is to screen quality films which appeal to the senses, lift the soul, and cause one to think about the complexity of the human condition,” said Associate Professor Batka.

The films on offer include the biographical thriller about Edward Snowden; the psychological study of a modern family, Force Majeure; the emotional drama, My King; and the winner of the 2015 Berlin International Film Festival, Taxi Tehran. The last screening will be on 1 July. After evaluating interest and feedback on the cinema, the faculty will be prepared to continue the project from the start of the winter semester.

“This initiative of the Evangelical Lutheran Theological Faculty is contributing to the understanding of European cinematography, which is values-driven and unjustly overlooked by film distributors. As the name suggests, Kino Campus is an attractive opportunity to enrich our communities; it has contributed to a feeling of university belonging and is also one of many examples of the openness of Comenius University both internally and towards the public,” said Comenius University Rector, Professor Karol Mičieta in praise of the project.

More information on the programme 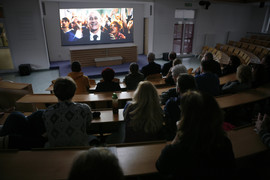