Some Good Guys from the Bone are Coming to Comenius University

Comenius University in Bratislava is joining in the Dobrák od kosti (Good guy from the bone) nationwide campaign. This campaign is aimed at promoting the National Register of Bone Marrow Donors in Slovakia.

From 2 to 16 May 2017, Comenius University is welcoming ambassadors from the Dobrák od kosti (Good guy from the bone) campaign to all its faculties and centres. Students and employees of Comenius University have the chance, without any obligation, to join the register of haematopoietic cells, which is a database which oncology departments use to search for suitable donors of haematopoietic cells for their patients. All that is needed for registration is a small sample of saliva.

The campaign was kicked off on Tuesday 2 May 2017 in the university’s historical building on Šafárik Square in Bratislava with the participation of the university leadership, the university’s academic senate, the Kvapka nádeje (Drop of hope) foundation, and the National Register of Bone Marrow Donors in Slovakia.
***
Any person fulfilling the following criteria can become a voluntary donor of haematopoietic cells:
- aged between 18 and 45 years at the time of registration;
- not a carrier of Hepatitis B or C;
- HIV negative;
- has not suffered from tuberculosis;
- does not suffer any heart disease, vascular diseases, bronchial asthma, or other serious chronic health conditions;
- has not had Lyme disease or infectious mononucleosis in the last year;
- is not suffering from an acute infectious disease;
- women of reproductive age should be at least one year from having given birth and should not be pregnant at the time of the donation;
- an application needs to be signed and the saliva sample needs to be sent for analysis.
For more information: Dobrák od kosti
***
Schedule of the Dobrák od kosti campaign at Comenius University faculties and centres 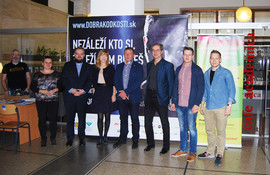 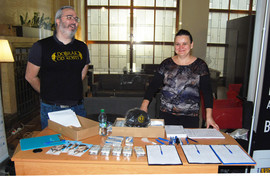 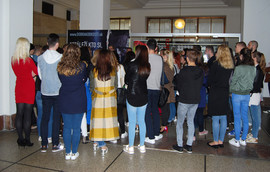