A Discussion on Europe with the President of Austria

On 26 April 2017 there was a discussion on Europe with the President of Austria, Professor Alexander Van der Bellen, in the Rector’s Hall of Comenius University in Bratislava.

The President of Austria was welcomed to the university on behalf of the Rector by Professor Peter Moczo, who is the Comenius University Vice-Rector for Science and Post-Graduate Study: “Austria is a neighbour who we have profoundly friendly relations with. President Bellen is an exceptional personality, scientist, intellectual, humanist, and politician. It is therefore a great honour for us to welcome him here to our university.”

Professor Van der Bellen gave a brief introduction, describing himself as a typical European, pointing out that he has Estonian roots on his mother’s side, Russian roots on his father’s side, and a surname of Dutch origin. He also expressed support for the process of European integration, accenting the importance of a united Europe.

Professor Jozef Bátora from the Department of Political Science at the Faculty of Arts of Comenius University moderated the discussion and highlighted the fact that President Van der Bellen had been successful in the presidential election in spite of undesirable social circumstances, with populism and xenophobia currently on the rise.
The discussion saw questions relating to Brexit, the upcoming French presidential election and the rising tide of extremism.
President Van der Bellen emphasized that he does not consider nationalism and radicalism to be undefeatable and gave as an example the presidential election result in his own country. He also believes that the French presidential elections will have a similar outcome.
The Austrian president also answered a question on what he thought about the direction the EU was headed and whether he saw any problems in the process of EU formation. On this matter, he said that there was a need for structural changes which would lead towards a federalization of the EU. He also pointed out that the European Commission often witnessed a confrontation between national and transnational interests, which he views as a serious problem.

Professor Van der Bellen also highlighted the role of culture in promoting a European identity and stated his position that a common market and trade union are not enough on their own to see the successful integration of Europe.

More information about the discussion with the President of Austria can be found in the May issue of Naša univerzita (Our university) magazine.
Photographs from the discussion: Comenius University on Facebook. 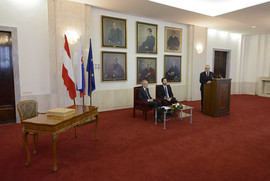 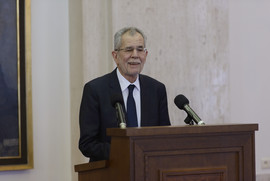 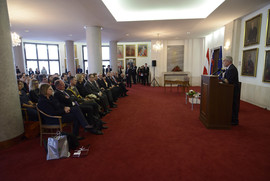 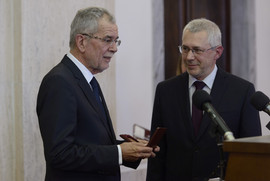