The culmination of the nationwide 2017 Week of Science and Technology was the announcement of the results of the Science and Technology Awards, which took place on 9 November 2017. The award winners included scientists from Comenius University in Bratislava: Professor Roman Martoňák, Dr Martin Urík, Associate Professor František Kundracik, and a team under the leadership of Associate Professor Andrej Šteňo.

This ceremonial event was held in the historical building of the National Council of the Slovak Republic and included the participation of the Minister of Education, Science, Research and Sport of the Slovak Republic, Dr Martina Lubyová, who praised the work of Slovak scientists: “I am pleased that we have people who enjoy science, work with conviction, and who through their results spread science’s fine reputation among the public in Slovakia and abroad.”

The Science and Technology Personality award went to Professor Roman Martoňák from the Faculty of Mathematics, Physics and Informatics for his outstanding results in the development and application of new methods of computer simulations of condensed substances under high pressure.

The Science and Technology Personality award for those up to 35 years of age went to Dr Martin Urík from the Faculty of Natural Sciences, who received the award for his contribution to research into environmental and geochemical aspects of the interaction of microorganisms, organic substances and toxic elements, and their use in remediation technologies.

For his work in the successful promotion of physics among elementary and secondary school pupils and the general public, as well as his mentorship of talented young people, Associate Professor František Kundracik from the Faculty of Mathematics, Physics and Informatics received the Science Popularizer award.

One of the three awarded science and technology teams of the year was a multidisciplinary team from Kramáre Hospital in Bratislava led by Associate Professor Andrej Šteňo from the Faculty of Medicine. The team was recognized for having developed a new method for the intraoperative identification of small cerebral vessels using a navigated 3D ultrasound to increase the safety of removing deeply-embedded brain tumours.

More information about all the awards 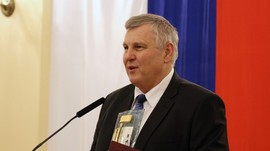