From 9 to 13 October 2017, the annual Atlas conference was held in Bratislava and was attended by over 300 particle physicists from more than 100 institutions from around the world.

The Atlas Experiment is a cutting-edge experiment in the field of particle physics and has been authored by over 3000 scientists from around 200 scientific institutions around the world, including Comenius University in Bratislava. This experiment, whose greatest success to date has been the experimental discovery of the Higgs boson, is aimed at exploring the fundamental natural laws of the world, including the mysteries of the origin and evolution of the universe.

The annual conference was held as a part of scientific cooperation between the Slovak Republic and the European Organization for Nuclear Research (CERN), based in Geneva, which is the most important international organization in the field of research into elementary particles and the structure of matter. This scientific partnership is one of the most successful examples of Slovakia’s multilateral scientific cooperation. Slovakia has been a member of CERN since 1993; membership in the organization is an important recognition of the quality of research and the level of Slovak scientists and institutions in the field of high energy (particle) physics. Membership allows Slovak specialists to participate in basic and applied research of a global importance and have access to unique facilities.

More information about the conference, as well as an interview with Professor Stanislav Tokár from the Department off Nuclear Physics and Biophysics at Comenius University’s Faculty of Mathematics, Physics and Informatics, who is involved in the above-mentioned research, will be presented in the November issue of Naša univerzita (Our University) magazine. 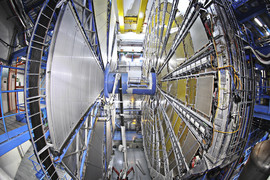