On 15 November 2017, students from Slovak universities, including some from Comenius University, received French degree certificates at a ceremony held at Matej Bel University in Banská Bystrica. Thanks to an international partnership, these students had been enrolled in both Slovak and French universities in eight study programmes. This international agreement meant they could receive both a Slovak and a French degree.

The event was an opportunity for the new graduates to meet the French embassy representative, François-Xavier Mortreuil, alongside representatives of French and Slovak universities and members of the France Alumni Slovensko social network. They shared their professional experiences with the fresh graduates and told them how they had made use of their Francophone studies in the Slovak labour market. 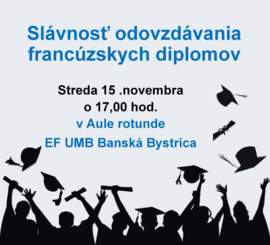