DISCUSSING THE HOLOCAUST AND EXTREMISM AT COMENIUS UNIVERSITY

The Holocaust and Extremism: Have We Really Learnt from the Past? This seminar was organized on 29 November 2017 at Comenius University’s Faculty of Law and the Faculty of Arts in association with the Israeli Embassy in Slovakia. The President of the Slovak Republic, Andrej Kiska, also took part in the event.

Knowledgeable experts from Comenius University, the Yad Vashem Museum in Jerusalem, and the European Jewish Congress explained the causes and course of the Holocaust in Slovakia and Europe, the reasons for the radicalization of society, and the legal possibilities for combating extremism.

“Freedom and democracy are not automatically guaranteed values. It is up to us to protect and develop them. We are meeting on academic ground, and in the words of John Amos Comenius, whose name is a part of our university: ‘The school is the manufactory of humanity.’ This was said so we can understand history and avoid a possible recurrence of inhumane and tragic consequences. Universities contribute to world knowledge, but they are also an important centre of humanity itself and of deep moral and ethical values,” said Comenius University Rector, Professor Karol Mičieta, in his opening address.

The seminar participants were also addressed by Israeli ambassador Zvi Aviner Vapni: “Today is a very special day for us, even though we did not plan it like this. Today is the 70th anniversary of the United Nations adopting Resolution 181, which allowed the establishment of the State of Israel. And this was possible thanks to the support of Czechoslovakia,” said the ambassador in commenting on that event on 29 November 1947. “Czechoslovakia was on the right side of history and we are grateful for this,” the Israeli ambassador said.

“For me, today’s seminar is proof of the fact that we are aware that the social situation is changing. On social networks, in public debates, and in political dialogue there is a questioning or denial of constitutional principles,” said the Public Defender of Rights, Professor Mária Patakyová. “Let me state my conviction that Comenius University preserves historical memory, and allows and protects open academic discussion,” Patakyová said.

The importance of the topic was supported by the presence of the President of the Slovak Republic, Andrej Kiska: “The reason why we should talk about the Holocaust and remind people of it is that we should never allow such a thing to become the future of our children.” The president also said that extremism often arises as a sign of defiance: “People are resorting to extremism as proof of their disappointment, anger, or frustration with how society operates, and therefore I am urging that extremism does not grow; it is the role of each of us who cares about the development of our country to think, within our own circles, about how we can help. Politicians are the most powerful force in this matter. However, the church has a role as well. It is also the role of teachers, professors, and the academic community to explain to young people that even primary school children should know how the country should work and what good and evil is,” the president said.

For more information, see the January edition of Naša univerzita (Our university) magazine. 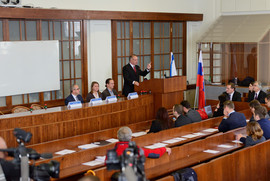 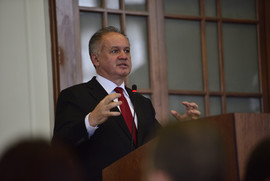 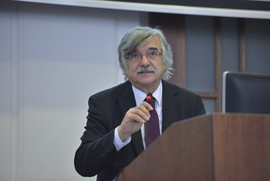 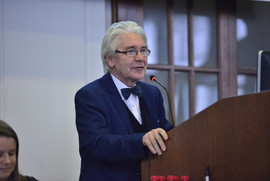 Professor Eduard Nižňanský from the Faculty of Arts 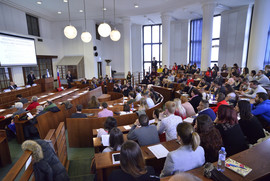