Comenius University is Slovakia’s largest university and has the longest tradition of higher education in Slovakia. On 27 June 2017, it celebrates the 98th anniversary of its existence. Comenius University was established by Act No. 375 Coll. on 27 June 1919. Even at the time it began, the university was of great importance in the development of education, science, and culture in Slovakia.

Comenius University has the profile of a research-focused university. It is firmly placed in the international environment, and in some international university rankings it has placed among the top two percent of universities in the world. It is also a significant cultural, social, and diplomatic venue. Proof of this can be seen in the recent visits by the UN Secretary General, Ban Ki-moon; the 14th Dalai Lama and Comenius University honorary doctorate holder, Tenzin Gyatso; the Austrian President, Alexander Van der Bellen; Omani Princess Mona; and the Georgian President, Giorgi Margvelashvili. The topic of new-age slavery was discussed at the university by Pulitzer Prize winner, Martha Mendoza. The world-renowned mineralogist, Professor Emil Makovický, also shared his knowledge with a gathered audience at the university upon receiving the 121st Comenius University honorary doctorate (Doctor honoris causa).

“The next chapter in the university’s story pushes us closer to the 100th anniversary, where the fundamental mission of the university – spreading education, culture, and humanism; and helping talented people use their own mental capacities and creative abilities for the development of society – will be remembered,” said Comenius University Rector, Professor Karol Mičieta. 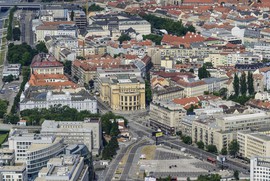