Comenius University will show the film “By a Sharp Knife”, which was inspired by the story of Daniel Tupý

Bratislava, 14 February 2019: On Tuesday 19 February a film which is inspired by the real story of Daniel Tupý, a student at the Faculty of Arts who was murdered on the Danube embankment in 2005, will be shown in the Comenius University Auditorium. His murder remains unsolved to this day.

“This is one way that Comenius University has decided to pay its respects to Daniel Tupý, given that expressions of violence, extremism and intolerance are still very current,” said Comenius University rector, Professor Marek Števček. The film is being exclusively shown to students and members of the university’s academic community. After the film screening there will be a panel discussion with the film’s director Teodor Kuhn, the screenwriter Jakub Medvecký, and the film’s producer Jakub Viktorín.

The feature-length film Ostrým nožom (By a Sharp Knife) has a prominent cast of experienced Slovak actors, including Roman Luknár, Ela Lehotská, Dávid Hartl, Táňa Radeva, Marián Mitaš, and Jana Oľhová, and opens up one of the most burning issues in modern Slovak history. It also provides a space for a broader social discussion on the topic of justice and its accessibility for ordinary citizens. The film’s story is of a father, who, in addition to coping with his son’s tragic murder, has to deal with defamation from the media, police inactivity, and his own feeling of guilt. From the very beginning, it appears that the murder of his son, a university student, will go unpunished. And we know that this impression from the film is confirmed by reality. The murder of Comenius University student Daniel Tupý remains unsolved after nearly fifteen years.

Comenius University commemorates Daniel Tupý in the form of a memorial plaque placed on the main university building on Šafárik Square as an expression of the academic community’s opposition to neo-Nazism, racism, and intolerance. Since 2011, the Faculty of Arts has awarded the Daniel Tupý Prize, which is for students who write works on expressions of violence, xenophobia, racism, Nazism, intolerance, and other inhumane phenomena in a Slovak and international context. 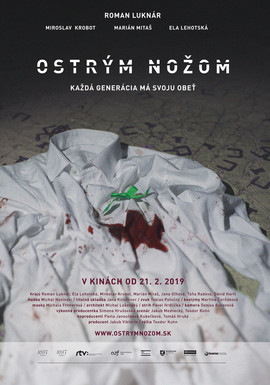