CELEBRATING ITS CENTENNIAL, THE FACULTY OF MEDICINE AWARDS SIGNIFICANT PERSONALITIES

The Faculty of Medicine, the oldest faculty at Comenius University, is celebrating one hundred years of existence. The first lectures took place there on 9 December 1919.

Three days of events to celebrate the centenary of the Faculty of Medicine of Comenius University culminated in the university's Auditorium on 19 September 2019 with a presentation of commemorative medals to leaders and representatives of important institutions.

Commemorative Medals of the Faculty of Medicine were presented by the faculty's dean, Juraj Šteňo, to fifty-two leaders and representatives from both domestic and foreign institutions. The Minister of Health, Andrea Kalavská, also attended the ceremony.

One day earlier on 18 September, the dean had awarded Commemorative Medals to 171 people in the Great Lecture Hall of the new theoretical institutes at the faculty.

The Faculty of Medicine is the oldest of the thirteen faculties of Comenius University. It started its activities as the first of the core faculties of what is Slovakia's largest and first modern university. The faculty has taken on the responsibility of educating Slovak society, fostering intelligent thought, knowledge, and science for precisely one hundred years.

The one hundred years of the academic existence of the Faculty of Medicine of Comenius University began on 21 September 1919. The initiative to establish and develop a national university in Bratislava was primarily the work of a Czech group of doctors led by Professor Kristián Hynek, who became the first rector of Comenius University. Together with a team of selected doctors, he established the first management of the faculty and appointed its teaching staff. 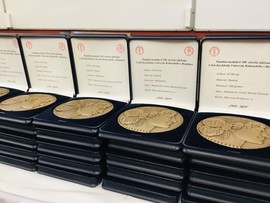 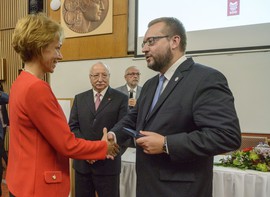 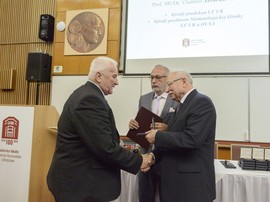