On 28 March 2019 the 100 Years with Amos student celebrations reached their climax in the vestibule of the main university building on Šafárik Square. On that day John Amos Comenius would have celebrated his 427th birthday, and so he came to celebrate this special day with all of us. Comenius himself was present in the form of a living statue and livened up the event. Visitors could take photos with him in a special photo area with fun props.

Comenius University rector Marek Števček also cut a cake in the shape of the university's anniversary logo. The Rector's Cup, which was the trophy of the previous day's sports tournament, remains in the hands of the rector for now. The sporting day ended with an even score between the teams from the Faculty of Medicine and the Faculty of Physical Education and Sport and will go down to a playoff.

This event completed three days full of discussions on interesting topics, fun and informative lectures, and meetings with well-known and inspiring personalities, including graduates and students of the university. 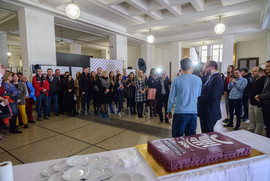 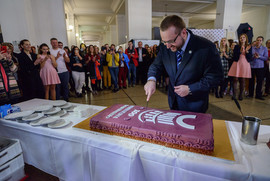 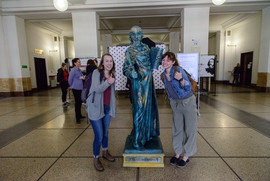