Comenius University astronomers continue the installation of their original astronomical devices in the Atacama desert in Chile, belonging to the dryest places on Earth.

The AMOS (All-sky Meteor Orbit System) system is used for observing the night sky in video and providing meteor orbits. It was developed and is operated by Astronomical and Geophysical Observatory of Faculty of Mathematics, Physics and Informatics, Comenius University in Slovakia. Since 2007 the prototypes of this system have been in operation and they currently form the Slovak video meteor network. AMOS is patented and was awarded by a gold medal at INVENTO 2013 exhibit.

AMOS provides scientific information on meteors - very small fragments of bodies of the Solar system - while entering the atmosphere of the Earth and burning in there. Study of meteors helps us to understand their parent bodies - asteroids and comets and the environment of the Near-Earth space. Locating AMOS in elevation of 2300 m above the sea level, with dark skies and excellent observing conditions allows the system to enhance its efficiency. In addition it provides observation of the northern as well as part of the southern skies. The data will help to improve the model of meteoroid populations around the Earth. These models serves for protection of satellites, space probes and the International Space Station in the orbit around the Earth.

The latest generation of AMOS was invented, developed, constructed, tested and installed within grant project APVV-0517-12 by astronomers and engineers (Tóth, Kalmančok, Zigo, Kornoš, Világi, Šimon) of the Faculty of Mathematics, Physics and Informatics, Comenius University in Bratislava. 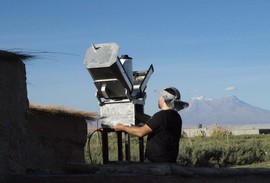 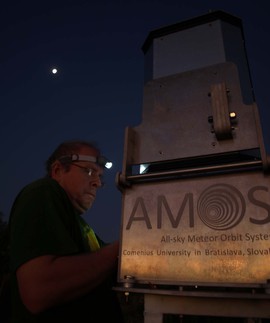