The Slovak AMOS System Has Been Installed in Hawaiian Astronomical Observatories

Bratislava, 15 October 2018: Astronomers from Comenius University in Bratislava have installed original astronomical equipment at world-class observatories in Hawaii. AMOS (the All-sky Meteor Orbit System) was installed on the summits of the Haleakala and Mauna Kea volcanoes.

AMOS is a system for observing the whole sky and determining meteor trajectories. It was developed at the Astronomical and Geophysical Observatory of the Faculty of Mathematics, Physics and Informatics at Comenius University in Modra. AMOS provides scientific information about meteoroids - small bodies in the solar system - and indirectly about their parental bodies, comets, and asteroids.

Since 2007, a prototype of this system has operated at four stations within the Slovak Video Meteor Network. In 2015, two AMOS stations were installed at observatories in the Canary Islands; and in 2016 two more were installed in the Atacama Desert in Chile. The AMOS system is protected by a patent and was awarded a gold medal at the Invento exhibition of inventions and innovations in 2013.

"By locating the equipment in astronomical observatories at an altitude of 3000 or 4000 metres above sea level in areas with a dark sky and excellent observational conditions, AMOS achieves a high level of efficiency. With these installations, we are gradually building a network of stations around the world to fully monitor the flow of meteoroid particles into the Earth’s atmosphere,” explains Associate Professor Juraj Tóth, who is an astronomer at the Faculty of Mathematics, Physics and Informatics and a co-author of the system.

The installation of AMOS cameras in Hawaii was preceded by a visit by Associate Professor Tóth as project leader to the University of Hawaii in January 2018, where he presented AMOS and its scientific results. With Dr Peter Vereš from the Harvard-Smithsonian Center for Astrophysics, who is his former student and colleague, and Dr Robert Jedicke of the Institute for Astronomy at the University of Hawaii, Associate Professor Tóth also visited the Haleakala and Mauna Kea observatories.

“Following collaboration with the University of Hawaii and the Smithsonian Submilimetry Array, we agreed on the placement of the AMOS cameras. We received final approval in March and were able to prepare two AMOS cameras and send them to Hawaii. The installation was carried out in September by our colleagues Pavol Zigo and Jaroslav Šimon, who were assisted by Peter Vereš and Klára Baloghová,” said Associate Professor Tóth.

“The installation of a system devised by our astronomers at world-class observatories demonstrates its uniqueness and efficiency. It is another important step towards the comprehensive observation of the sky worldwide and the ability to monitor and accurately determine the location of impact of even smaller bodies during an extraordinary event,” said the Comenius University Rector, Professor Karol Mičieta. 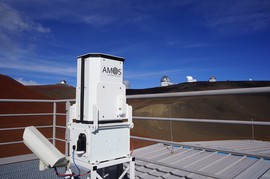 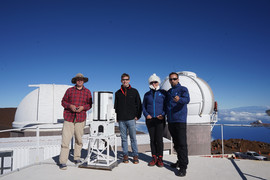 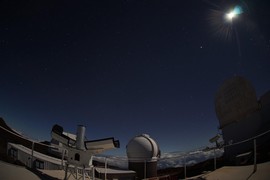 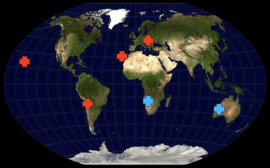