Bratislava, 8 October 2018: The civilization of the ancient Mayans was much more expansive than has previously been believed from archaeological discoveries. To ensure sufficient food, they used a sophisticated irrigation and drainage system that could feed millions of people. As part of an international team, scientists from Comenius University have uncovered the principles upon which Mayan agriculture functioned. Their results have recently been published in Science.

The article’s 18-member team of authors includes Professor Milan Kováč and Dr Tomáš Drápela from the Department of Comparative Religion and the Centre for Mesoamerican Studies of the Faculty of Arts at Comenius University as well as Dr Tibor Lieskovský from the Faculty of Civil Engineering at the Slovak University of Technology.

The Mayan civilization flourished on and around the Yucatán Peninsula from 1000 BCE to 1500 CE. The Mayans are known for their advanced writing, art, architecture, astronomy, and mathematical knowledge. However, many aspects of the functioning of their society have remained unknown, because the area where they once lived is now covered by thick forest. In 2016 an international research team composed of scientists from the United States, France, and Slovakia began exploring the forest by scanning it using a Lidar laser system, which can penetrate the otherwise impermeable forest cover. From the acquired images, scientists were able to identify hidden cities, palaces, pyramids, and other archaeologically significant structures.

As the article published in Science states, some 61,480 ancient structures have been identified in the 2144 km2 of the Mayan biosphere reservation in Guatemala mapped to date. Based on this information, the research team estimates that from 650 to 800 CE between seven and eleven million people lived in the area. Such a large population required intensive cultivation of the soil. Examining these agricultural elements was a separate analytical task for the Slovak part of the team led by Professor Milan Kováč. Their research revealed an irrigation system of terraced fields in the mountains and the drainage of swampland in low-lying areas.

“From the area we have independently examined, spanning 160 km2, we have been able to identify 5112 previously unknown Mayan buildings and 6080 farming terraces. We have been able to interpret these results, which were processed and verified by means of archaeological excavations in the field, in a social and historical context at the highest level of expertise; these results are some of the most important parts of the whole research project, as they demonstrate the existence of sophisticated agrarian systems,” Professor Kováč said.

The existence of these systems helps explain the high population density in the area and, according to scientists, can also help in understanding the “collapse of the Mayan civilization”, which took place in the ninth century CE. It also indicates the environmental vulnerability of the whole system, as the destruction of irrigation and drainage systems could have led to food shortages, wars, and subsequent extinction. As the article in Science points out, the Lidar data revealed many defensive structures, suggesting the existence of hostilities and conflict within Mayan society.

The article, entitled “Ancient Lowland Maya Complexity as Revealed by Airborne Laser Scanning of Northern Guatemala”, was published on 29 September and has received an immediate scholarly response. The Slovak authors are continuing their work on this topic as part of a Slovak Research Development Agency project.

“The originality of the research results is proven by its publication in Science, which is a prestigious journal. I am convinced of the need to bring together leading institutions and top scientists within joint research projects. I am therefore delighted with the work of our own scientists with their colleague from the Slovak University of Technology,” said Professor Karol Mičieta, Comenius University Rector. 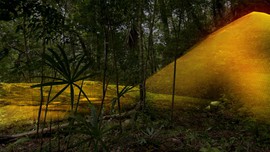