A Memorial Plaque Will Commemorate the Location of an Important Ministry

The one-hundredth anniversary of the establishment of Czechoslovakia will see the unveiling of a memorial plaque at the former site of the Ministry for the Administration of Slovakia, the highest government body of the newly-formed republic in Slovakia. Today the building houses the Faculty of Arts of Comenius University in Bratislava.

A memorial plaque will be unveiled on Monday 29 October 2018 at 3:30 pm at the main entrance to the building of the Faculty of Arts at Comenius University (2 Gondova Street) with the participation of Pavel Sladký, the Chargé d’affaires of the Embassy of the Czech Republic in Slovakia; Professor Karol Mičieta, the Rector of Comenius University; and Radoslav Števčík, the Mayor of the Bratislava-Old Town city borough. The authors of the plaque are Soňa Halásová and Linda Pavelková, who are both students of the Academy of Fine Arts.

The Ministry for the Administration of Slovakia, led by Vavro Šrobár, was the highest government authority in Slovakia after the formation of the Czechoslovak Republic in October 1918. From December 1918 to 2 February 1919, the ministry was based in Žilina before moving to Bratislava after the taking of the city by the Czechoslovak army and the declaration that it would be the Slovak capital. The ministry began functioning in the former building of the Austro-Hungarian military headquarters on 4 February 1919.

The unveiling of the memorial plaque will be the highlight of a seminar entitled “Slovakia in Czechoslovakia: Issues One Hundred Years after the Formation of the Common State,” which is being organized on the occasion of the 100th anniversary of the Czechoslovak Republic’s formation by the Faculty of Arts of Comenius University and the Institute of History of the Slovak Academy of Sciences. Slovak and Czech historians will present at this event. The seminar will take place from 9 am on 29 October in the Moyzes Hall in the Faculty of Arts building, with the entrance from the Vajanského Embankment being opened for this purpose. Entry is free to all who are interested.

The text on the memorial plague will read: “The Ministry for the Administration of Slovakia, the highest governmental authority in the newly-formed Czechoslovak Republic in Slovakia, was based in this building from 4 February 1919.” The Faculty of Arts of Comenius University, the Bratislava-Old Town city borough, 28 October 2018.

The seminar programme in the Slovak language is here. 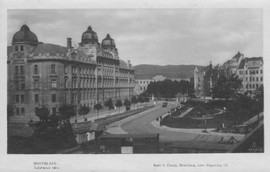 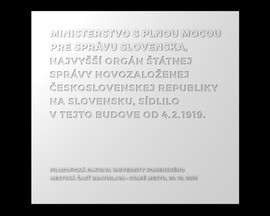 A visualization of the memorial plaque