Bratislava, 12 February 2018: An international research team has searched for traces of ancient Mayan civilizations in the Guatemalan jungle. Using the new technologies of airborne laser scanning called LiDAR, they discovered great Mayan cities with more than 60,000 stone pyramids, temples and other structures. The discoveries have been published in the National Geographic Magazine just days ago.

A Slovak research team, led by Professor Milan Kováč from Comenius University in Bratislava, which was a part of these findings, charted over 160 km2 of land in the province, Petén, in the north of Guatemala and discovered 73 Mayan buildings of stone architecture, 4,775 mountain terraced fields and 5,080 architectonic objects mainly in the shape of pyramids.

“In 2016, we became part of an international consortium – PACUNAM Lidar Initiative. In cooperation with Tulane University and Boston University, we received financial support for laser research of the Guatemalan jungle. We searched for traces of the ancient Mayan civilization in a restricted location, where our Slovak archeology team has operated for ten years and has performed large archeological excavations,” said Milan Kováč.

The new technology of airborne laser scanning LiDAR penetrates the retentive jungle surface and shows new cities, palaces, pyramids, ancient agriculture fields, and other archeologically significant objects. “LiDAR operates on a principal similar to a radar. However, instead of radar waves it uses laser light. LiDAR is placed under the airborne, from where it sends 160,000 laser impulses per second and records its reflection from the surface. Today, technologies allow to differentiate whether the laser ray reflects from the tree-top, vegetation or reaches the surface of the earth while perfectly recording a character of the structure,” explains a geodesist, Dr. Tibor Lieskovský, from the Slovak University of Technology in Bratislava, who specializes in analyzing LiDAR data on this project.

The Guatemalan province, Petén, is mostly covered with inaccessible rainforest and vastly occupies up to 35,854 km2. According to the analyzed data, gained by scanning, it was inhabited by 10 – 15 Million people. “A discovery of 60,000 structures and hundreds of cities in one year does not have a parallel in the history of ancient civilization research. The Mayan civilization is at least as interesting as those of the Egyptians or Mesopotamians. Besides its surprising advantage we uncovered its size, density and complex infrastructure that we had no idea about,” concludes Professor Kováč.

Along with Slovakia, France is attending this technologically and scientifically challenging research initiated by Universities from the USA. A collective paper of the consortium is being prepared for publishing in Science Magazine. 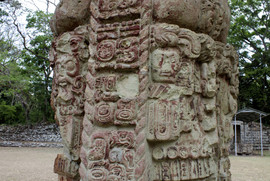