Bratislava, 9 May 2018: Significant research results on the structure of quantum graphene by physicists from Comenius University in Bratislava were published at the beginning of April 2018 in the scientific journal Physical Review B within its Rapid Communications section, which publishes highly original findings in the field of condensed matter physics. The article was also selected as an Editors' Suggestion. The article’s authors are Juraj Hašík and Roman Martoňák from the Faculty of Mathematics, Physics and Informatics at Comenius University, and the Italian physicist Erio Tosatti from the International School for Advanced Studies, Trieste, Italy (SISSA).

Graphene is the thinnest possible layer of carbon, being just one atom thick. It is most simply portrayed as a wire mesh of carbon atoms arranged as regular hexagons. In the last decade, this fascinating system has been of substantial interest to theoretical and experimental physicists as well as to materials scientists. The discovery of graphene introduced a new paradigm of 2D materials and was worthy of the Nobel Prize in Physics in 2010. Due to their interesting electronic and other properties, graphene and other similar single-layer materials, such as molybdenum disulphide and phosphorene, are considered to be possible future materials for a wide range of applications, such as in electronics, sensors, displays, and energy storage.

“2D materials are very different from ordinary 3D crystals, because they do not take up space and are a very thin membrane. The thermal motion of atoms at any given temperature causes the membrane to not be flat but rather rippled, and all the more so as the temperature increases. Therefore, graphene is never perfectly flat, i.e., without ripples, because eradicating thermal motion would require cooling it down to absolute zero. And this temperature, as we know, cannot be reached,” said Professor Roman Martoňák from the Department of Experimental Physics at the Faculty of Mathematics, Physics and Informatics.

Even if thermal motion could be eliminated, atoms would not stop moving entirely, not even at absolute zero. The scientific community has known for around one hundred years that the world of atoms does not obey the laws of classical physics. “The rules of quantum mechanics apply in the microscopic world, and these rules state that it is not possible to take away so-called zero-point motion from atoms. In the classical world, an atom without thermal motion would be localized at a precise point and atoms in graphene would form perfect regular hexagons. In the quantum world, however, the atoms shiver and induce ripples on graphene, even when there complete lack of thermal motion,” the Comenius University physicist said.

Juraj Hašík is a graduate of Theoretical Physics at the Faculty of Mathematics, Physics and Informatics. He wrote his diploma thesis under Professor Martoňák in 2015 and examined how these quantum ripples were formed in graphene and how they could be measured. He implemented, coded, and tested the path integral quantum Monte Carlo method for graphene. He then continued this research during his doctoral studies at the International School of Advanced Studies in Trieste, where he collaborated with Professor Erio Tosatti.

In extensive numerical simulations performed on the Aurel supercomputer in the Computing Centre at the Slovak Academy of Sciences, he studied a graphene sample of a roughly square shape and a size of 11 nm. He managed to cool it down to a temperature of 0.6 K (-272.6 °C), which is about one order of magnitude lower compared to that reached in similar simulations in academic literature. At this temperature, the given sample fully obeyed the laws of quantum mechanics.

These simulations confirmed that quantum ripples are quite different from their classical counterparts. “They are weaker on long distances and therefore do not ‘crumple’ the membrane. On short distances, however, they are stronger and make the membrane more ‘rough’ locally. Simply put, quantum graphene is flatter at very low temperatures but at the same time also rougher than the classical one. Interestingly, at low temperatures below 50 K (-223.2 °C) the fluctuations from the median plane of the membrane as a result of quantum rippling reach about two degrees. This is a surprisingly large value and represents a spectacular occurrence of quantum zero-point motion in a macroscopic object,” said Professor Martoňák in emphasizing the importance of the research findings.

This value could be experimentally measured, for instance, by electron diffraction, and physicists expect that such an experiment will be undertaken in the near future. Graphene thus offers a unique "window" into the microscopic world, where one can see and separate the thermal and quantum zero-point motion of carbon atoms.

“The originality of these research findings concerning the structure of quantum graphene is evident, given their publication in a prestigious scientific journal. I am convinced of the necessity for significant scientific institutions and elite scientists and teams to join together in projects based both here and abroad. It is therefore very pleasing to see the fruitful work of our scientists and their Italian partner,” said Comenius University Rector, Professor Karol Mičieta. 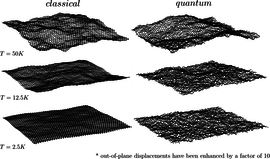 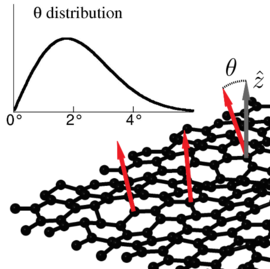