Bratislava, 17 May 2018: Silicon provides a form of protection for plants against the impacts of stress, including that from the presence of heavy metals in soil. This topic, as well as others on cleaning up the environment with the help of plants, is the focus of work by an elite research team of experimental biology at Comenius University led by Professor Alexander Lux. Tomorrow, 18 May 2018, is Fascination of Plants Day.

The contamination of the environment by harmful substances is an important challenge for society. Through plants, toxic materials can end up in the human body and threaten our health; this was a taboo topic until recently. However, carefully chosen types of plants can be used as an alternative way of cleaning up such contaminated areas.

Like humans, plants, which absorb most nutrients through their roots, come into contact with elements and materials which are not only superfluous to their needs but also harmful. Such substances can accumulate in plants and enter the food chain, even reaching the human body. “The mysterious increases in the number of civilizational diseases, allergies, and problems with fertility in ‘developed’ parts of the world are not just examples of media panic; they are real. This is an unpopular topic for politicians and food producers. Indeed, in some parts of the world, including at one time even in Slovakia, such stories were not even publishable,” says Professor Alexander Lux from the Department of Plant Physiology at the Faculty of Natural Sciences at Comenius University in Bratislava.

According to Professor Lux, the deserted mines and dumping grounds left behind after excavation activity in Slovakia are contaminated with harmful substances; many fields are contaminated with toxic materials, cheap fertilizers, and protective substances which intensive growing practices require in this day and age. Stories have emerged of the presence of BETEX (benzene–toluene–ethylbenzene–xylene) in groundwater and of the presence of now prohibited pesticides, insecticides, and fungicides. One solution to these problems is the “purification” of such areas by using plants; this is something known as phytoremediation.

Purification occurs of its own accord when poisonous dumping areas and bodies of water gradually become overgrown by vegetation which absorbs toxic substances, or which in the case of organic materials metabolically modifies or decomposes them. “However, this process can be sped up and made more effective with the selection of suitable types of plants which would ensure that a great deal of what the root system is surrounded by, and what plants under normal circumstances try not to take in, can be transported to the ground surface and collected, and in the case of some metals even recycled under ideal conditions. Asides from this, there is the continuing search for plants and the breeding of plants which we use as sources of food which have a lowered level of the transportation of noxious agents from the root level to the ground surface and to the fruits and seeds which we consume on a large scale,” Professor Lux said.

The elite team of experimental biologists are also looking into the presence of silicon in plants, which in terms of plant physiology is something of an anomaly. Silicon is not considered to be an essential element for plants; however, many types of plants accumulate significant amounts of it. Being abundant in the soil as well, silicon has not been the subject of scientific interest for all that long. However, in recent decades there has been more and more evidence of its exceptional properties in protecting plants against the effects of stress. In this sense, the study of silicon is extremely important.

“Our experiments have shown that the application of silicon has a beneficial impact on plants in overcoming various forms of abiotic and biotic stress, be that due to the presence of heavy metals and other toxic elements, and even in protecting plants against the attack of parasitic plants which destroy crops. The mechanism triggered by the presence of silicon in plants has not yet been thoroughly studied in all its aspects, and this gives us further opportunities in terms of scientific application,” the Comenius University biologist said.

The members of the department led by Professor Lux have been recognized by the Accreditation Commission of the Ministry of Education, Science, Research and Sport of the Slovak Republic as an elite team of national importance and with international recognition. As a sign of recognition, Comenius University awarded this team with a Comenius University Silver Medal.

“The significant level of the application of research results in the growing of suitable plants for the decontamination of our environment, the prevention and minimizing of the occurrences of civilizational diseases, and the improvement of health and living conditions for people is noteworthy. This is a unique scientific endeavour by the team led by Professor Lux, which is one of twenty-six elite teams at the university which have been recognized by the Accreditation Commission of the Slovak Republic out of a total of fifty-four such teams at Slovak universities,” said the Rector of Comenius University in Bratislava, Professor Karol Mičieta. 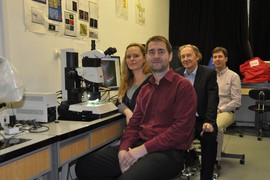 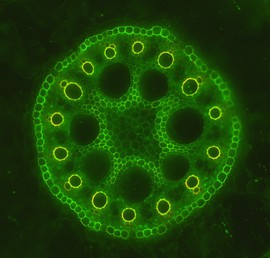