Bratislava, 26 April 2018: The Department of Human Geography and Demography at the Faculty of Natural Sciences of Comenius University and the Demographic Research Centre at Infostat have published unique results on current and future demographic development (up to 2035) of the eleven largest cities in Slovakia. The publication is called Perspektívy, riziká a výzvy demografického vývoja najväčších miest Slovenska (Prospects, risks, and challenges in the demographic development of Slovakia’s largest cities). It includes Bratislava, Košice, Prešov, Žilina, Nitra, Banská Bystrica, Trnava, Trenčín, Martin, Poprad, and Prievidza.

The publication deals with questions such as why cities change quickly, how they are changing, what they will look like in twenty-five to thirty years, immigration and emigration assumptions, and possible responses to demographic developments. This is the first time that such a detailed study on this matter, which takes into account individual cities, has been undertaken in Slovakia, or indeed the broader region; most often demographic analyses are done on a nationwide level. By contrast, this study presents the cities being analysed using the same method and in three given scenarios. Of these, the middle scenario is the most likely one, whereas the higher and lower scenarios are the notional limits of demographic development.

The largest cities do not form a monolithic whole. They have a lot of similarities as well as differences. “No city has reached a total fertility rate of two children for every woman, which is considered to be the conservation value for a population’s size when immigration is not taken into account. Currently, Bratislava has a fertility rate which is higher than other cities, which tend to have rates either at or below the Slovak average. Fertility is also falling for generations when calculated to reflect intergenerational changes,” said Associate Professor Branislav Bleha, who is a demographer at Comenius University.

In more than half of the cases in all cities, people were becoming parents at the age of thirty and later. In only one fifth of cases were the parents younger than twenty-five. The average age of parents sharply increased after 1989. The demographers expect there to be an increase in fertility, but do not expect it to reach a level of two children for every woman; these values are going to be between 1.6 to 1.8 children instead. Even though the experts are expecting a growth in fertility rates, the total number of children born will fall because there will be fewer women aged between fifteen and forty-nine.

Another area of analysis was marital relationships. “It is a nationwide trend that more and more children are being born outside of wedlock. Martin and Prievidza have the highest proportion of children who are born outside of marriage,” said Dr Branislav Šprocha, the head of Infostat’s Demographic Research Centre. “In the larger cities, there has been a sharp decrease in marriages, and people there get married later than in the smaller cities. On the other hand, it is surprising that whereas married couples in larger cities some ten or twenty years ago were divorcing at a higher rate than in smaller ones, the rate there today is about the same when compared to other cities,” Šprocha added.

The inhabitants of larger cities live considerably longer than they did twenty-five years ago. In all eleven cities, they live longer than the Slovak average. The highest impact on the increase in average life expectancy was the lowering of mortality among people aged between sixty and seventy-nine. However, there is a natural population decrease as more people are dying than are being born. In the cities analysed, and without exception, experts are expecting a further improvement in mortality rates for men and women, with them staying below the national average in this regard. Despite this, the number of inhabitants in cities, with the exception of Bratislava, will decrease. The average lifespan is expected to increase by three to six years by 2035. The proportion of those aged over sixty-five will increase by one fifth and in Prievidza by as much as two thirds.

All cities, with one exception, will lose inhabitants due to outward migration. “The exception here is the capital city, which after the end of the ‘black demographic decade’ some ten years ago started to show positive results and an increase in people living there who come from all the regions of Slovakia,” said Bleha. “In the future, we expect there to be a lowering in migrational loss, and some cities will join Bratislava as places with a growing population thanks to migration flows. However, in Prešov, Martin, Poprad, and Prievidza, migrational factors will cause a lowering of the populations there up to the year 2035,” Bleha added.

The increase in average life expectancy and in the number of senior citizens will see a growth in the value of the economic burden index. The ageing of the population in larger cities is essentially irreversible despite the incoming migration of younger people.

“This unique publication on demographic developments in individual Slovak cities is another example of how the university has the human resources and scientific potential to classify and predict both mid- and long-term developments. In this way, it makes it possible for political, social, and specialized parameters to be set, and for necessary solutions to be adopted which will benefit all of society so it will develop in the most effective and fruitful way,” said Comenius University Rector, Professor Karol Mičieta. 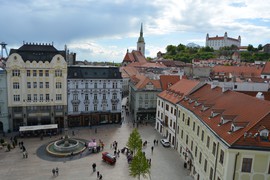