Bratislava, 20 March 2018: Groups of animals can fulfil complex tasks despite individual members having extremely limited abilities or knowledge of the whole group. The question of how these complex forms of behaviour are formed, and how dependent they are on the behaviour of the individual, is the focus of the latest research by Dr Katarína Boďová from the Faculty of Mathematics, Physics and Informatics and has been recently published in the PLOS ONE scientific journal.

Dr Katarína Boďová from the Department of Mathematical Analysis and Numerical Mathematics at the Faculty of Mathematics, Physics and Informatics deals with the study of biological systems where chance plays a great role; she studies these systems using mathematical models and numerical simulations. Such problems appear in various areas of biology, such as in population genetics and the collective behaviour of animals.

"Ants can create bridges from their own bodies, fish can guard themselves against much larger predators, and humans are able to create national cultural heritage,” said Dr Boďová in response to the question on how greater collectives can complete complex tasks. "In an environment with a chemical signal (such as the aroma of food) bacteria present two alternating types of movement – direct and rotating in place. So far the identification of principles of collective behaviour has only been looked at in technical terms which ignored such a variety of types of behaviour, dependence of movement on spatial environs, and random influences,” said Dr Boďová.

In her latest work, which was recently published in the PLOS ONE scientific journal with help from colleagues at IST Austria and the Weizmann Institute of Science, she presented a new mathematical approach to examining animal behaviour. In the form of probable hybrid models, this approach acknowledged different forms of behaviour by individual animals. It can identify principles of individual behaviour, interaction between individuals, and the influence of the environment on this sort of behaviour.

"Thanks to the development of technology, we can now use a continually greater amount of more complex data about the movement and behaviour of animals. However, this can present a problem in deciphering essential information which can reveal the principles behind this fascinating group behaviour. This inquiry is hampered by the fact that the movement of animals is typically accompanied by sudden changes in individual behaviour, such as in posture or direction of movement and in seemingly random moments, where the internal situation is changed,” said Dr Boďová.

Researchers are planning to use the new method to identify social behaviour in different groups of animals. For instance, they will look for answers as to how ants deal with half of their group becoming infected by a pathogen, with altruistic behaviour for the benefit of the group being a particular point of interest. This will aid in uncovering the speed at which infections spread in such populations.

Dr Boďová returned to the faculty after having spent time abroad. This was thanks to the Return Home grant programme provided by the Ministry of Education, Science, Research and Sport of the Slovak Republic, which helped her meet costs associated with moving back and establishing the necessary conditions for commencing further research.

"A valuable part of Dr Boďová’s research is that it shows we can motivate internationally successful young researchers to come back to Slovakia and establish for them adequate conditions for top-level scientific activity. At the same time, it is essential to provide young researchers with conditions so that they need not look abroad, often without the likelihood of returning to Slovak research institutions,” said Professor Karol Mičieta, Comenius University Rector. 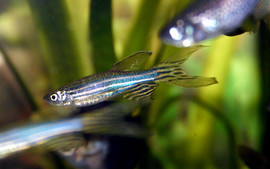 The zebrafish (Danio rerio) is an animal which the research team employed the new method on (source: Wikimedia Commons) 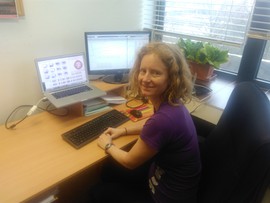