Bratislava, 8 January 2018: Critical limb ischaemia is a disease which negatively affects the wellbeing of patients. It carries a high risk of limb amputation and has a considerable mortality rate. The search for new methods of treatment for this condition forms the core work undertaken by doctoral student Adriana Samáková from Comenius University’s Faculty of Pharmacy.

Statins (medicines which lower the levels of cholesterol and lipids) and the possibilities of their application in regenerative medicine was the focus of a supported research project completed in the last year by Adriana Samáková, an internal doctoral student at the Department of Pharmacology and Toxicology at the Faculty of Pharmacy under the supervision of Professor Ján Kyselovič from the Faculty of Medicine.

The topic of research was critical limb ischaemia (a serious condition causing a lack of blood flow to the limbs); when it is at an advanced stage, traditional healing methods for this disease often do not work or are not able to be implemented. “One of the new experimental methods for patients with cardiovascular disease is the transplantation of stem cells. Even though this form of treatment has been proven to be safe and effective, the transplantation of bone marrow cells involves a lowering of their number and functionality after being placed in damaged ischaemic tissue,” the doctoral student said. However, this problem can be eliminated by pharmacotherapy before an operation is performed. In her project, Samáková chose to focus on the potentially positive or negative effects of the use of statins by patients undergoing the bone marrow cell transplantation procedure.

The project also examined the influence of statin therapy on the number of cells supporting the creation of new vascular structures (endothelial progenitor cells). Along with atherosclerosis, the lack of these cells is a main cause of critical limb ischaemia.

The research sample comprised twenty-two patients older than eighteen years who had an advanced stage of critical limb ischaemia. From October 2014 to May 2017, these patients underwent treatment at the National Institute of Cardiovascular Diseases in Bratislava under the guidance of Dr Juraj Maďarič. In the clinical part of the research, Samáková also worked with Dr Andrea Gažová from Comenius University’s Faculty of Medicine.

“Our research showed that the number of observed regenerative cells in transplanted bone marrow is the same for patients suffering from ischaemia whether or not they use statins. After introducing a new method, we registered an increase in the number of endothelial progenitor cells in the group of patients using statins as opposed to the group that did not use them. We plan to repeat these analyses and expand the observed groups of patients for the confirmation of these findings. In the near future, we are also planning to continue in our research into transplanted stem cells and profile the expression of microRNA, which can become a basis for new diagnostic methods,” Samáková added. 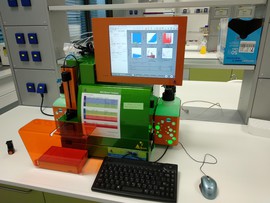 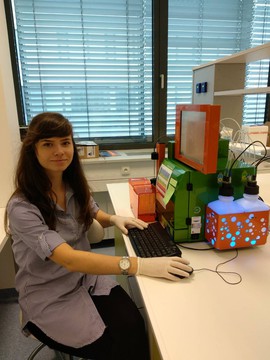