Rectors of the Danube Region Meet in Bratislava

From 7 to 9 November 2018, Comenius University in Bratislava hosted the annual meeting of the Danube Rectors’ Conference, which brings together nearly 70 universities of the Danube region. The conference focuses on universities as centres of regional development. Comenius University was the host of the conference’s meeting, which has a tradition stretching back to 1983, for the fourth time.

The annual conference meeting was opened in the Rector's Hall at Comenius University on 8 November 2018 by Comenius University Rector, Professor Karol Mičieta, who is also the vice-president of the conference itself. “I am deeply convinced that our cooperation in education, science, and research as well as the exchange of ideas among the Danube region’s universities plays an important and perhaps decisive role in the development of our common region with huge innovation potential,” the rector said.

The Ministry of Education, Science, Research and Sport of the Slovak Republic was represented at the meeting by the general director of its universities’ section, Jozef Jurkovič. Participants were also welcomed in a video address by the Vice-President of the European Commission, Dr Maroš Šefčovič.

The Head of the European Commission’s Representation in Slovakia, Dr Ladislav Miko, highlighted the topic of the conference and said that universities are contributing to regional development in all areas. He also explained the European Strategy for the Danube Region and other commission projects which the Danube Rector’s Conference can profit from, such as EU structural funds, the Cohesion Fund, pre-accession funds, Horizon 2020, Life +, and Interreg. He stressed that there is enough funding but a lack of well-prepared projects, even though their number is slowly growing.

The Chairman of the Danube Rector’s Conference, Danube University Krems Rector, Friedrich Faulhammer, thanked Comenius University for being the host and discussed the history of the conference and its annual meetings as well as some of the European projects for the support of regional development; he emphasized the need for university cooperation for the benefit of the Danube region as well as Europe in general. 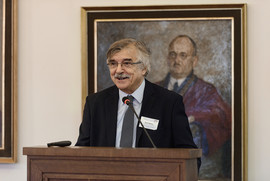 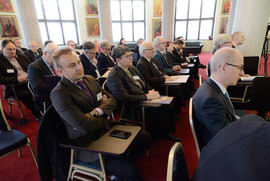 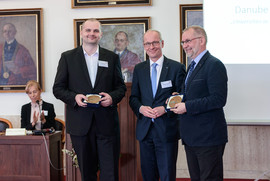