On 18 December 2017, a ceremony was held to award the Ludmila Sedlárová-Rabanová Prize and Scholarship for 2017 at the Faculty of Natural Sciences. This event included the opening of a new genetics laboratory.

The second year of awarding this prize was sponsored by Viliam Sedlár in honour of his wife, Dr Ludmila Sedlárová-Rabanová, who had greatly contributed to the development of genetics and evolutionary biology in Slovakia in the second half of the 1950s. This ceremonial event was organized by the Dean of the Faculty of Natural Sciences, Associate Professor Milan Trizna, in partnership with the Natura civic association.

Four candidates were in the running for the prize in the final round of competition. The prize committee eventually chose Associate Professor Peter Vďačný from the Department of Zoology at the Faculty of Natural Sciences. He received the prize, which carries a financial reward, for his co-authorship of a series of works on the integrated analysis of phylogenesis of selected groups of ciliates. On the basis of this, he described several evolutionary trends dealing with the emergence of new species and their extinction. The other three nominated candidates, who had all achieved original results in 2017, were awarded with an honorary mention by the dean.  They were Dr Renáta Švubová from the Department of Plant Physiology at the Faculty of Natural Sciences; Andrea Cillingová from the Department of Biochemistry at the Faculty of Natural Sciences; and Dr Ján Radvánszky from the Institute for Clinical and Translational Research of the Biomedical Research Centre of the Slovak Academy of Sciences.

This year also saw a scholarship competition take place. This was won by Silvia Schmidtová from the Institute of Experimental Oncology of the Biomedical Research Centre of the Slovak Academy of Sciences. Her three-month stay in the laboratory of Professor Looijenga at the Department of Pathology, Erasmus Medical Center Rotterdam, will help her acquire valuable results in her research into cisplatin-resistant cell lines as well as experimental skills which can then be applied in her home laboratory.

The ceremony was preceded by the opening of the Ludmila Sedlárová-Rabanová Laboratory, which is located in the Department of Genetics at the Faculty of Natural Sciences and which will be a place for the performance of experiments using molecular and genetic methods.

The sponsoring of scientific research and education from private sources without the expectation of financial return is a remarkable act in the Slovak context. The decision by Viliam Sedlár to support talented and exceptional Slovak scientists and university-based research deserves admiration and evokes a sense of hope that others will follow his lead. 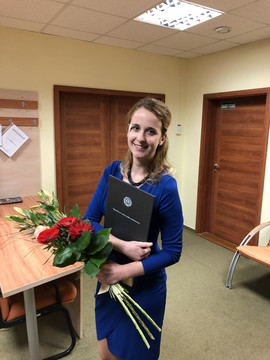