Thousands of students and teachers march for free universities

The protest against the proposed amendment of the Higher Education Act was organised by Comenius University Bratislava in cooperation with the Slovak Technical University, the Council of Higher Education Institutions and the Student Council for Higher Education. The Slovak Rectors' Conference also expressed its support for the event.

Slovak academia is disappointed with the approach chosen by the Ministry of Education, Science, Research and Sport of the Slovak Republic, which ignored the proposals of the contact group and is forcibly attempting to have universities directly managed by political nominees. The universities mainly criticise the proposed legislative amendment for enabling direct control of universities by political nominees, depriving the universities of control over their property and failing to address the real problems of higher education. Next year’s budget for Slovak universities is expected to be cut by €28 million, even though it already is much lower than in Czechia, Hungary or Poland.

The organisers chose safety yellow to be the colour of the protest. Yellow respirators handed out to protesters and mandatory distancing reflected the protest’s responsibility. Protesters carried yellow balloons and yellow banners with the slogan "Responsible protest for free universities". Other mottoes of the protest included: No Going Back Before November 89; Less State in Schools; We Want to Reform, Not Deform.

Several officials of universities addressed the crowd on Námestie Slobody (Freedom Square). Filip Šuran, president of the Student Council of Higher Education, warned the politicians that they were taking free universities from us. "Most of the young people you oust go to the Czech Republic. Czechia has long been investing in dormitories, campuses, teaching facilities, laboratories, but first and foremost, in highly motivated educators who don’t need to maintain two additional jobs just to support their families. If the system of administration is the same in the Czech Republic, then it can’t be the problem. If you're saying you want curb the exodus of the young, I'm happy. But this amendment will certainly not stop it, quite the opposite," he added.

Martin Putala, president of the Council of Higher Education Institutions, said that it was not true that the ministry had been discussing the matter with higher education institutions for over a year. According to him, the amendment published after the meetings of the contact group is based on the same faulty principles as the original proposal from the beginning of the year. "Dear Minister, and Secretary of State, this is not how we envision cooperation. You're supposed to be here for the universities, rather than vice versa. We urge you to accept our main points or to step down," said Martin Putala.

"The Rectors of Slovak higher education institutions support reforms of the Slovak higher education system. This amendment, however, was rejected by the Rectors who demand its withdrawal. We formulated a list of inputs for the inter-departmental review. We will fight to make sure these fundamental issues are reflected in the negotiations," said Rudolf Kropil, President of the Slovak Rectors' Conference, adding that higher education needs to be financed better even as it can match the schools in the countries of advanced Europe and the rest of the world. "We want a high-quality reform," he emphasized.

"As a student, I am angry and I am disappointed," said Nicole Makóová from the University of Trnava. "This amendment does nothing to improve study conditions. We come to study at universities and other higher education institutions to learn and to be taught by scientists and educators who have the freedom of research, of teaching and of disseminating their scientific opinions," she concluded.

The student anthem, Gaudeamus Igitur, was played at the end of the protest. 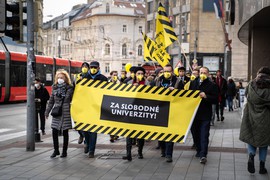 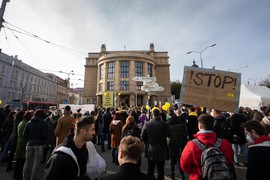