Bratislava, 7 October 2020: Through evolution species acquire many novelties in their morphology. Using the example of embryonic development of vertebrate cells the researchers described in detail how the evolution of new genes influenced specific morphological innovations. The prestigious journal Nature recently published a study on this topic which was authored by a team of scientists from the University of Colorado in Boulder. One of the main authors was David Jandzík, a zoologist and evolutionary biologist from Comenius University Bratislava.

There are relatively few examples documenting the role of new genes in the evolution of specific morphological innovations in species. An international team of scientists therefore decided to study embryonic development of neural crest cells (NCCs) which only occur in vertebrates. During the development of the embryo the migrating NCCs produce cartilage, bones and nerve or pigment tissues.

Scientists studied the diverse functions of the so-called endothelin signalling pathway between the two main evolutionary branches of vertebrates - jawed and jawless. Jawed vertebrates include sharks, fish, amphibians, reptiles, birds and other mammals in addition to humans, while jawless vertebrates include lampreys and hagfish. They are our distant "cousins", separated from us by more than half a billion years of independent evolution. During this evolution the bodies of our ancestors changed, gained new structures and lost others, took on new shapes. Some features, such as the endoskeleton or jaws, have allowed the emergence of whole new groups of animals, like jawed vertebrates.

"Genes that encode the signalling proteins of the endothelin pathway are unique to vertebrates, as are neural crest cells whose development is regulated by these proteins," explains David Jandzík. Endothelins regulate the migration of these neural crest cells and determine into which cell type they develop and where in the embryo they end up. "The fundamental finding of the article in Nature is that the individual proteins of the signalling pathway were formed in successive steps. Gradually, they specialized into individual functions and their evolution took place independently of the main evolutionary groups of vertebrates. Their specialization is reflected in the various shapes and body forms of vertebrates," explains the scientist. Both endothelins and neural crest cells represent evolutionary innovations and have played a vital role in shaping the design of our bodies.

"We examined the function of the genes by turning them off in a targeted way using the CRISPR/Cas9 method. It democratizes genetics and makes it available even to us who study the stranger creatures, such as lampreys and frogs. By turning off genes typical for vertebrates we could cause a disappearance of the exclusive body features which define us as vertebrates. We managed to open an evolutionary window and peer half a billion years into our own past," added the biologist from Comenius University.

The study is part of an interdisciplinary field called "evo-devo" or evolutionary developmental biology, in which David Jandzík and his colleagues are working. This field asks primary evolutionary questions and applies a comparative approach to examining the embryonic and larval development of different types of organisms. It uses methods and knowledge of a wide range of disciplines from molecular biology and genetics through classical morphology and experimental embryology to phylogenetics and paleontology.

The research received a grant from the Scientific Grant Agency of the Ministry of Education, Youth and Sport of the Slovak Republic and the SAV VEGA, no. 1/0415/17. 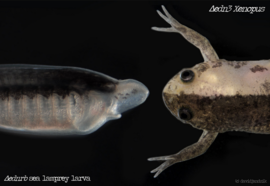 In the study, the researchers compared the functions of the developmental genes of vertebrates with differing body structures: the sea lamprey (a representative of jawless vertebrates) and the African clawed frog (a representative of jawed vertebrates). This allowed them to reconstruct the mechanisms which were modified through evolution and led to the origin or change of cell types, tissues, organs or whole body parts.