Once again, Michal Fečkan among the top 1% most cited mathematicians in the world

Bratislava, 18 November 2021: For the second time, Comenius University Bratislava mathematician, Michal Fečkan, appears on the list of the most cited researchers in the world. A few days ago, he received the prestigious Highly Cited Researcher 2021 award in mathematics, after his publications garnered over 3,300 citations.

This year's list of the most cited researchers includes 6602 names from various fields and over 70 countries. These are researchers who have had a significant impact in their field in the last decade by being frequently cited. Their publications are among the top 1% most cited in the Web of Science™ database. The list is published by Clarivate, which owns and operates a collection of scientific resources, including the prestigious Current Contents database.

Michal Fečkan works at the Department of Mathematical Analysis and Numerical Mathematics of the Faculty of Mathematics, Physics and Informatics at Comenius University. He specializes in nonlinear functional analysis, dynamic systems and their applications. His contributions to the analysis of solutions to equations involving fractional derivatives attract great attention. He has authored several scientific monographs published by reputable international publishers. At the same time, he is the sponsor of the master studies of managerial mathematics and of the doctoral program of numerical mathematics at the university. He is the holder of the 2017 Slovak Scientist of the Year award. His Hirsch index is 28.

"It is a recognition of my research work. I do mathematics because I enjoy it and I know how to do it. But I also need a response to my work, and my inclusion on this list validates my effort. I am also grateful to my family, the academy and the university for allowing me to do my research. Without them, I would not be where I am now. So my feelings are complex, but generally positive and humble," Michal Fečkan responded to the award.

He received the Highly Cited Researcher award for the first time in 2019 and repeated his success in 2021. More good news for Slovakia is that other Slovak researchers are also on the list this year. The Slovak University of Agriculture in Nitra has two representatives - Marián Brestič and Marek Živčák. The fourth Slovak researcher is Kaudia Jomová from the University of Constantine the Philosopher in Nitra.

The Czech Republic, Poland and Austria have ten scientists in the ranking each, while Hungary has three. The largest proportion of highly cited researchers are from the U.S., 2622; China, 935; and the United Kingdom, 492.

"I am particularly pleased by the international recognition of Professor Michal Fečkan, who is one of the world's leading experts in his field. His research was also acknowledged by Nobel Prize winner Kip Thorne during his recent visit to Comenius University. The case of Michal Fečkan is a proof that Slovak universities can do world-class research," concluded the Rector of Comenius University Marek Števček. 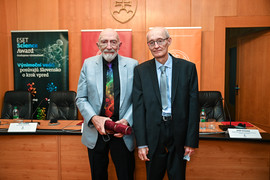 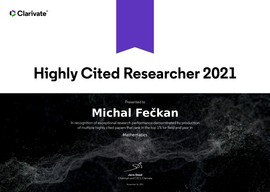