On Wednesday, 14 October 2020, the ESET Science Award was presented for the second time. This year, the event took place in Bratislava’s Old Market (Stará tržnica) under strict public hygiene measures. The award is be awarded to the most exceptional scientists in three categories. This year, experts from Comenius University became laureates in two of them: outstanding individual contributor to Slovak science and exceptional academic. The laureates were selected by an international jury headed by Nobel Prize-winning physicist Kip S. Thorne after an arduous evaluation process.

Fedor Šimkovic became the holder of the title of exceptional individual contributor to Slovak science in 2020.

Prof. RNDr. Fedor Šimkovic, CSc. works at the Department of Nuclear Physics and Biophysics at the Faculty of Mathematics, Physics and Informatics of Comenius University. In his scientific work he focuses on neutrinos which belong to the most abundant elementary particles in the universe. They are created in nuclear reactions in the sun (and other stars), during collisions of cosmic rays with our atmosphere, during decay of heavy nuclei deep inside Earth, but also in our body. "Neutrinos are a mystery and at the same time the key to understanding the evolution of the universe and the processes which go on in it," he says.

Ivan Varga became the exceptional academic of the year after a vote by representatives of Slovak universities of science.

Prof. RNDr. Ivan Varga, PhD. works at the Faculty of Medicine of Comenius University and his research team was one of the first in the world to describe wide lymphatic spaces in the fallopian tube wall and the presence of specialized immune system cells suppressing immune reactions in the fallopian tube lining. He now builds on this basic research and explores how the new knowledge could be used to treat women's infertility. His team also managed to confirm the connection between some congenital heart defects and the altered microscopic structure of the thymus. As a pedagogue he is a proponent of the theory that a good teacher must highlight the bits of knowledge in the vast amount of human wisdom which will actually be useful to the student in practical life. He identifies with his father's belief that it would be a tragedy if on day the students did not surpass their teacher in wisdom.

Tamás Csanádi MSc. was the laureate in the category of exceptional young scientist in Slovakia under the age of 35.

Tamás Csanádi, PhD. from the Institute of Materials Research of the Slovak Academy of Sciences in Košice studies the deformation behaviour of ceramics in micro- and nanoscale in order to develop new advanced structural ceramics with improved plasticity. This would make the ceramics more reliable and allow them to serve as an alternative to metals, but with a higher melting point, higher hardness and strength. He reminds that, "the development of new materials doesn't just benefit the industry, but also our daily lives."

"All award laureates and finalists are an example of what contemporary science in Slovakia should be like. Their scientific work is linked to international research and approaches problems from the perspective of multiple scientific disciplines. Their research also addresses to the current problems faced by the society in Slovakia and abroad," says Richard Marko, CEO of ESET.

The ESET Science Award was created by the ESET Foundation at the end of 2018 to shine the spotlight on exceptional individuals of Slovak science whose contribution is significant not only for Slovakia, but also for international scientific research. 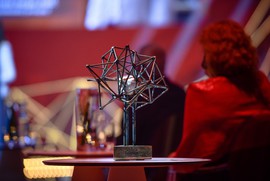 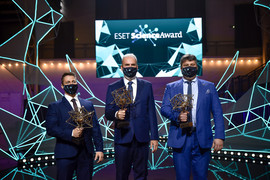