Bratislava, 30 October 2019: Exactly thirty years after the Velvet Revolution, the CU Auditorium will once again be the centre of changes. On 16 November 1989, the night before the larger protests in Prague, CU students decided to stand up to the regime. The events over those two days were the beginning of the Velvet Revolution in Czechoslovakia. Thirty years later, on 17 November 2019, speakers at TEDxUniverzitaKomenského will present revolutionary changes in the most diverse areas. This enthralling event will take place at Comenius University for the second time.

This daylong programme of short, powerful, and often amusing presentations will be held in four sections: the planet, society, art, and technology.

In the upcoming days, the TEDxUniverzitaKomenského team will reveal the final three speakers. The first will be an expert on civil law, the second will be a renowned personality from the events of November 1989, and the third will be an internationally recognized barman who has committed himself to bringing the Slovak bar scene up to a level of international brilliance.

Of the names revealed so far, Nikoleta Kováčová (Raw Daughter) will be introduced in the first section on the planet, explaining why she will no longer convince people to become full vegans. Lukáš Krnáč will talk about the responsibilities of the fashion industry, and Jakub Hrbáň will talk about climate activism and the Fridays for Future movement.

The second part of the event will see Katarína Nagy Pázmány talk about preparing protests as a part of the For A Decent Slovakia movement, Braňo Tichý (People in Peril) will talk about meaningful foreign aid, Karol Lovaš will speak about dialogue, Zuzana Kovačič Hanzelová will dwell on the importance of public service television, and Viktória Nguyenová will talk about activism among millennials.

The third section is devoted to art. Filip Ostrowski will present the reporting literature of the Absynt publishing house, Stanislav Ondruš (ŠťukArt) will talk about the freedom of expression, Milan Brejcha (Crystalis) will speak on acapella singing, and Boris Meluš and Braňo Čavoj will talk about the emergence of the Nová Cvernovka cultural centre.

In the fourth section focusing on technology, medical student Martin Pekarčík will talk about his startup, which focuses on improving equipment in health care in developing countries. Martin Královič (PS:Events) will talk about security at large events, and Richard Červenka (Fou Zoo) will speak about food as an experience.

TEDx conferences show how we can make serious topics popular and deliver fun and engaging talks. In addition to lectures, visitors can look forward to interesting activities during the breaks, full-day catering, gifts, interesting prizes from sponsors and partners, and an afterparty.

“Our universities should be more open to the outside world and to communities. TEDx events are a great format for this. People will come, be they high school students, university students, or university officials. The youngest speaker will be sixteen years old and the oldest will be seventy. The people who organized the demonstrations in 1989 will meet people who were preparing the protests in 2018 and 2019. All of this will be right in our legendary auditorium, where students protested thirty years ago," said Radomír Masaryk, the founder of TEDxUniverzitaKomenského and the vice-rector of Comenius University for external relations. “Every year in my free time I visit several TEDx events. It's a great format for making science more popular. Also, I always leave them with inspiration and hope that there are so many people who want to make changes for the better,” he added.

TED is an organization dedicated to promoting ideas worthy of dissemination. The main conference takes place in Vancouver, Canada. TED grants licences to local organizers who, once the conditions are met, can then organize their own TEDx events. The events are of a non-profit nature and the speakers and the organizers do not receive any fees for their involvement.

Further information about this event is available at www.TEDxUniverzitaKomenskeho.sk. This event is financed entirely by participants’ and sponsors’ contributions. A ticket to this event can also be bought by those who are not part of the university community. 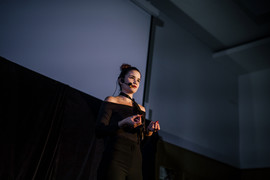