Scientists Discover a Perfectly Preserved Lizard from the Mesozoic

Bratislava, 2 February 2022: It lived 45 million years before the famous Tyrannosaurus rex, but it looks like it was running among the trees and hunting for prey just days ago. The body of the reptile, which lived on Earth 110 million years ago, was preserved in tree resin, including its skin and scales. An article describing the discovery of a lizard perfectly preserved in Myanmar amber appeared Monday in the prestigious, open-source journal Scientific Reports, which is published by Nature. The lead author is Andrej Čerňanský, a scientist from Comenius University Bratislava.

The lizard trapped in amber was named Retinosaurus hkamtiensis. It is a juvenile specimen consisting of a head and the anterior portion of the trunk, including the pectoral girdle and forelimbs. The length of its skull is only about one centimeter, so the lizard was relatively small, but amber finds usually contain such small specimens. Tree resin is a natural trap for many organisms which are preserved in it when it hardens.

"I will never forget the moment back in December 2019 in Bangkok, when I looked into the microscope and saw a lizard that was so perfectly preserved in amber that it looked like it died just a few days ago. This was not a common sight, even for an experienced paleontologist, " Andrej Čerňanský from Comenius University describes the origins of the research.

The specimen has a uniquely preserved, three-dimensional skeleton. Compared to other specimens found in Myanmar amber, this one has complete and amazingly intact skin. Individual scales and their shape are discernible both on the head and on the body. The left side even preserves the eye and eyelid. Surprisingly, inside the specimen scientists found the trachea and partial bronchi. The discovery offers a unique opportunity to see the real appearance of a reptile which crawled on Earth 110 million years ago. This specimen is interesting because it has perfectly preserved soft tissues, while in most other cases little more than the skeleton remains.

Since its discovery, the fossil has travelled the world. First, it was brought from Asia to Texas in the U.S., where it was scanned using CT. It was then flown to Australia, where researchers analyzed it with a very powerful variant of computed tomography - the synchrotron. This method allowed them to study every little detail of the prehistoric lizard. It was eventually brought to Switzerland, where it was placed in a museum.

Phylogenetic analysis of molecular data placed the Retinosaurus reptile as a relative of the Tepexisaurus and Xantusiidae lineages. This points to an interesting hypothesis, that the present group known exclusively from North and Central America may have originated elsewhere than indicated by their hitherto known biogeography. The reason could be an early split in lizard lineages during the Early Cretaceous which would have occured, in this case, somewhere in Gondwana (the Southern continents and India). The Burma Terrane microplate (today's Myanmar) was probably not part of Asia at the time when our lizard lived. Back then, the area may have been an island which separated from Australia and travelled northwest.

"The topic is still quite controversial and leaves room for other interpretations of the origin of animal lineages occurring during the Cretaceous in this area," explains evolutionary biologist and palaeontologist Andrej Čerňanský from the Faculty of Natural Sciences of Comenius University. The scientist has long been studying vertebrates trapped in Myanmar's amber, which appears to still hide many secrets.

Mgr. Andrej Čerňanský, PhD., is a member of an international team of scientists. Their study about a strange lizard from Myanmar, which was at least 11 million years younger, was published last year. In 2020, they also described amphibians called albanerpetontids, which lived on Earth for an incredible 165 million years, in the Science Journal. 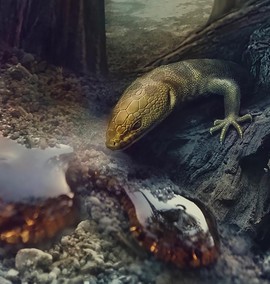 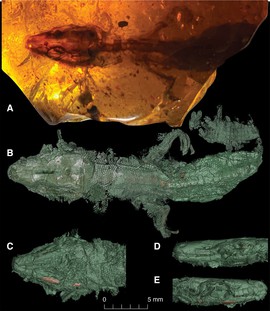