University disagrees with restriction of academic rights and freedoms

CU AS and CU Management are categorically opposed to the attempt at restricting basic academic rights and freedoms whose elementary manifestation is the autonomy of academic self-government. We consider the principle of legitimate academic prerogatives to be the immanent legacy of European universities from medieval and modern times and one of the achievements won back in November 1989. We are proud to be a part of this legacy because experience of the watershed moments in our history makes us deeply convinced that the self-governing principles embedded in the administration and operation of higher education institutions need to be protected, nurtured and reasonably strengthened. These are above all the principles that guarantee the humanism, altruism and defence of human dignity in the process of learning, education and research. Only universities and other higher education institutions whose environment is designed in this way are capable of exerting a positive influence on the values of society at large and today this goal appears to be more important than ever before.

The balance of power in today's postmodern democratic society is too fragile for us to gamble with the basic pillars of the system which has already proved to be an operational and decisive element in the struggle for the basic direction of the Slovak Republic. With this statement, CU AS and CU Management join the statements of the three highest representatives of CU (CU AS Chairwoman, Chairman of the CU General Board and the Rector of CU) published on 3 September 2020, as well as the statements of the Slovak Rectors' Conference of 6 October 2020 and of the Council of Higher Education Institutions of 8 October 2020, responding to the call of CHEI Presidency of 16 October 2020. CU AS and CU Management call on the competent authorities to launch a thorough societal and scientific discussion on how academic rights and freedoms could be retained and on how to effectively improve the quality of university education and scientific research in Slovakia whilst including these issues among the aims set out in the above mentioned document. 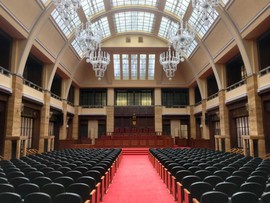