On 15th November 2020, we commemorated 350th anniversary of the death of the teacher of nations. John Amos Comenius is a historic figure whose significance goes beyond the Czech and Slovak cultures. No wonder - many of the ideas he formulated in the 17th century are still relevant today.

Changing the world through education

Comenius laid the foundations of modern pedagogy as an independent scientific discipline and presented the first comprehensive theory of universal education and lifelong learning. His worldview was rooted in universalism and himself he was a universal man. As a teacher, he was convinced that tolerance among humans and nations alike depends on the education of an individual. As a humanist he believed that both man and humanity need to be awakened and shown the way towards morality. His emphasis was not only on the religious and natural moral consciousness of man, but also on the value of work, diligence, entrepreneurship and knowledge. In his work, he combined the traditions of humanism, Christian philosophy and the newly conceived pedagogy into a grand, pansophic system.

Going to school with pleasure

Comenius' pedagogy can be summarised in his motto  “omnes, omnia, omnino”, (to teach) everything to everybody, thoroughly. His idea of a happy nation was one endowed with an abundance of good schools, good books and good teachers. Comenius saw the school as the crucial tool for improving society. According to him everyone should be educated, regardless of age, gender, social status, and religious persuasion. Education should provide the tools needed for a meaningful life. All available means and methods should be used to achieve this goal and make sure that knowledge is imparted by using example and playful learning. Comenius himself saw the schools of the time as "torture chambers" and he sought to convert them into manufactories of humanity which ennoble the mind, speech, and actions of man.

Comenius is credited with authoring as many as 250 smaller and larger writings. It is definitely worth the effort to discover the depth and timelessness of his ideas; not only for teachers, theologians or philosophers, but also for the young generation. Its members are the ones who should be concerned with searching for values which can foster a better human society. Comenius' ideas endowed with peace, understanding and tolerance continue to be supremely relevant for the modern world. His pansophic philosophy represents a system of truth and universal values which are the sole promise for a future in which education and humility lead to understanding and peace.

John Amos Comenius was born on 28 March 1592. He studied theology and was a member and bishop of the Unity of the Brethren church. His work was inspired by ancient Greek and Roman teaching as well as Christianity. He sought to eliminate all forms of repression that suppress the human nature. According to him, schools were to be transformed into manufactories of humanity. In the religious field he promoted freedom of conscience as the highest value. His best known works include Labyrinth of the World and Paradise of the Heart, Didactica Magna (The Great Didactic), Orbis Sensualium Pictus (Visible World in Pictures) and Schola Ludus (School by Play). The ideas promoted by Comenius are considered to be a foundation of many modern European institutions. In 1956, he was named the patron of the United Nations Educational, Scientific and Cultural Organization (UNESCO). He died on 15 November 1670 in Amsterdam, probably as a result of a stroke. The birthday of the teacher of nations - 28 March - became the official holiday of all teachers in Slovakia.

"All people should be educated towards humanity."
(J. A. Comenius) 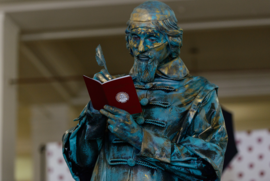