Bratislava, 1 February 2021: Consequences of excessive alcohol consumption are the third most common cause of death worldwide. They include diseases resulting from excessive drinking and accidents caused by intoxication. Experts from the Institute of Forensic Medicine and Medical Expertise of Comenius University in Martin have long been studying this problem.

In Slovakia, excessive drinking kills 7.5-times more men than women and nearly half of alcohol-related deaths (46.5%) occur at home. Most of them happen in autumn and winter months and they are more frequent during the weekends. People aged 40 to 50 are most at risk.

Excessive drinking among women is a relatively new trend. Starting in the early 1990s, drinking habits of women have shifted from hidden domestic alcoholism to public consumption in pubs and their outdoor seating. “This trend has had a negative impact: increased mortality of women due to road accidents, hypothermia and drowning while returning home,” explains Associate Professor Ľubomír Straka from the Institute of Forensic Medicine and Medical Expertise of the Jessenius Medical Faculty of Comenius University and the University Hospital in Martin. Disappointingly, Slovaks also lead EU charts in their lack of awareness of alcohol’s effects on the human fetus: “Slovak women are the least aware of the teratogenic effect of alcohol on the human fetus during pregnancy. They do not know that they should not be drinking alcohol while pregnant,” warns forensic medical specialist Ľubomír Straka.

The average Slovak older than 14 (including tee-totalers) consumes 11.1 litres of pure alcohol per year, 1.3 litres more than the European average. According to the World Health Organization about 5.5% of Slovaks (mainly men) older than 14 have a form of alcohol dependency. Altogether people with some level of drinking problem account for up to 10% of the population over fifteen.

“Foreign studies show that alcohol abuse might be an even bigger problem among university students, affecting as many as 20% of them,” says psychologist Dr. Michal Hajdúk. An anonymous survey is currently being conducted at Comenius University into harmful alcohol consumption among students, and its results should be available soon.

It is particularly alarming that more than 50% of violent deaths worldwide are linked alcohol abuse. Alcohol is also the cause of 30 - 50% of road accident casualties. Numerous studies have shown that the costs of excessive alcohol consumption to the state are higher than the cost associated with cancer treatments.

Campaigns like ‘Dry January’ or ‘Dry February’ are currently being promoted around the world, calling for a month of alcohol abstinence from alcohol use. Their goal is to raise awareness of the harms of alcohol drinking. “Such campaigns can give people valuable information about their own relationship with alcohol,” thinks CU psychologist Dr Michal Hajdúk, a psychologist from CU. Studies support the claim that even such short -term abstinence can have positive health effects. About half of the people who quit drinking do so because of similar campaigns. 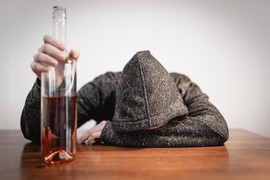