Top science, research and innovation centre is shaping up in Bratislava

Bratislava, 21 January, 2020: Two premier Slovak universities, the Slovak University of Technology (STU) and Comenius University (CU), joined forces with the Slovak Academy of Sciences (SAS) and are successfully developing several major projects. This time the three institutions teamed up with the Bratislava self-governing region, the city of Bratislava and other potential partners in both the public and private sectors, to launch an initiative with the potential to create a zone of top science and research in our capital. This agreement was reached today in an online meeting attended by the managements of STU, CU and SAS, by managers of their faculties and institutes, foremost scientists and project managers.

The idea to create a Centre for Science, Innovation and Cooperation (CEVIS) is motivated by the need to boost the quality of the science base, to link academia and business, enable SMEs to invest in innovations with a high proportion of R&D, and to promote research and development aimed at generating commercial applications. "We need to improve the governance in research and innovation, and reduce the fragmentation of administration systems which throttles the development and sharing of knowledge and skills," said STU Rector Miroslav Fikar during the presentation of the idea.

"I am pleased that the cooperation of our institutions is no longer purely formal but is expanding to include other projects and activities. By escalating the human potential, interdisciplinary cooperation and by creating suitable conditions and new opportunities we help advance science, research and innovation in Slovakia, and beyond," emphasized the Rector of Comenius University Marek Števček.

By fostering effective cooperation of top science and research resources and aligning their activity with practical needs the centre could match skill demand with supply at the regional level, and leverage the benefits resulting from intelligent specialization. It will include a business/academic incubator, provide start-up support and generate research cluster spin-offs.

The centre will focus on creating solutions to specific regional challenges and will provide a cutting-edge work and research environment, hoping to attract students and young researchers from Slovakia and abroad. It also aims to maximize the positive impact of knowledge and technology transfers.

According to preliminary plans, CEVIS facilities would be located in the various campuses, sites, faculties and scientific facilities of the three founding institutions, particularly at Lafranconi Bridge, Mlynská dolina, Patrónka, Železná Studienka, Rázsochy and the city centre. In most cases, the premises will be very compact and enable future interlinking and expansion. The project is officially coordinated by the Slovak University of Technology. It is, however, open to other potential cooperating partners, including universities, national and local authorities, and businesses.

The concept of the Centre for Science, Innovation and Cooperation aligns with the financing goals of the REACT-EU initiative, the Recovery Plan and the new implementation method in the 2021-2027 programming period. There will be a single Operational Program for Slovakia which will be implemented in the regions in accordance with eight Integrated Territorial Strategies (ITS). Regional Partnership Councils will have the final say and will also approve the ITS. The Bratislava Regional Platform for Territorial Cooperation among Socio-Economic Partners has five chambers and six theme-based commissions. The two founding universities and the SAS are members of the Chamber of Socio-Economic Partners. The Partnership Council of the Bratislava region is chaired by the region’s chairman Juraj Droba. Bratislava’s mayor Matúš Vallo will serve as vice-chairman of the Council. The Commission for science, research and innovation will also include representatives of STU, CU and SAS and will be headed by Rastislav Igliar from STU.

At the online meeting, more than sixty representatives of STU and CU management and of their faculties, together with leading representatives of the SAS, also evaluated the progress of other cooperation programmes, including ACCORD (STU and CU), TEAMING (SAS and STU), SASPRO II (SAS) and CNIC (SAS). They concluded that the programmes have significantly contributed to improvements of the conditions for science, research, innovation and education. 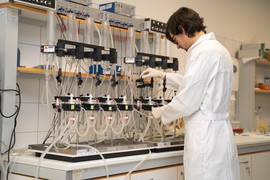