Scientist of the Year Pavol Prokop: Males who don’t bring gifts don’t get too far

Nuptial feeding, sexual conflict, sexual cannibalism. These are topics which behavioural ecologist from the Faculty of Natural Sciences Pavel Prokop has been researching for years. He investigates why various species of animals, including humans, behave the way they do. Recently, he clarified the attributes of sexual selection in humans and his work earned him the 2021 Slovak Scientist of the Year award.

You are a Slovak pioneer of behavioural ecology, which seeks to explain animal behaviour. Why do you think trailblazers like you were not paid much attention until now?

Indeed, almost none at all. During my student days, when I became interested in this area, only foreign publications were available. Behavioural ecology was not discussed during seminars in zoology at all, or only very rarely. In my opinion, zoology research had a very conservative focus.

Exactly. I didn't have a role model or anyone to coach me. I've always been a bit of a self-made-man. I was searching for my own topics and formulated questions for myself. Even when I was about to embark on my diploma thesis, I did not like the suggested topics. So I drafted my own set of questions and found a supervisor who (fortunately) approved them. I've always been like that. Sometimes I notice something in the forest and a new idea is born. That is how my current research of pollinators originated. I noticed they prefer to pollinate blue-coloured scillas rather than snowdrops. At other times I read something interesting in a paper, like that web-weaving spiders are capable of learning. So I started working on that and ran some experiments.

Did your research career begin with insects and invertebrates?

My first scientific paper was about magpies. Birds intrigued me from when I was a child and back then I thought I would study raptors. I studied cuckoos and warblers, but also spiders or praying mantises, i.e. arthropods.

How do you research the behaviour of insects - do you observe it in its natural environment or only in labs?

The godfathers of ethology, Konrad Lorenz and Nikolaas Tinbergen, both had different styles of work. Lorenz took home everything he researched. Tinbergen, on the other hand, worked in the wild. I'm a Lorenzian type and I need to bring everything home, or nowadays, to the lab. But the lab is not the only place I enjoy, in this I'm very opportunistic. Just as I often change topics, I change environments. It depends on the subject of the research.

For the models I apply, yes. If the animals manage to reproduce, the lab environment can’t be that uncomfortable for them. But I don't mean to say it's an absolute copy of what's out there.

How many pairs do you need to observe for the results to be representative?

I work with the number twenty. This means, twenty repetitions of some experimental situation. I also monitor to what extent the behaviour is variable, and whether there are reasons for repeating the situation. I started doing statistical tests that predict what sample size you need. This is needed to make the results statistically relevant.

What else is important in your research - time, location, season?

In the research that I do, time is extremely important. This is because I mostly work with animals that are extremely difficult to breed in the lab. Spiders are cannibalistic, so you have to keep them separated. I therefore depend on the season and have to work adult individuals. That also means I need to work quickly and efficiently. Particulars of a system also play a role. When studying nuptial feeding, for instance, I have to choose the one species of spiders, out of the thousand I keep, that does it. That one is the nursery web spider, Pisaura Mirabilis.

Nuptial feeding - that sounds almost romantic. How does it work?

It consists of transferring substances with a greater or smaller nutritional value from a male to a female, in most cases. There are only a few exceptions to this rule. The female brings gifts to a male in the case of one small water strider (Phoreticovelia disparata), and the gifts are mutual among cockroaches and also humans.

So there are certain parallels between animal and human behaviour?

I only see parallels. For example, when choosing partners. Symmetry is a characteristic feature that is consistent across species. In most cases, whether it's birds, mammals or insects, it turns out that the more symmetrical individuals are also more attractive to the opposite sex. We believe this is because symmetry is a reflection of developmental stability. Individuals who are sufficiently immune face fewer diseases. Every disease affects symmetry. The fewer such signatures there are, the more symmetrical and attractive the individual is. There is another interesting analogy that emerged from the study of red-back shrikes (Lanius collurio). The male brings his partner a nuptial gift, usually a small prey. However, he brings a smaller gift to his own “wife” than to his “girlfriends”. So he invests much more in "extramarital" relationships. Do you see any analogies there?

Yes, it reminds me of something. You study species where the female has the upper hand. The female decides whether she accepts a gift with the nursery web spider and the female praying mantis is also more dominant. What attracts you to these species?

I didn't look at it that way - being attracted by dominant females. But you are right that in both species the female decides what will happen. In nursery web spiders it was discovered that if a female copulates with a male who had not brought her a gift, which is quite rare and brief, the female will expel that male's sperm. Without a gift, she will eliminate him from the game. Even if he manages to woo her, he won't get very far.

Do we know why some species are sexual cannibals and others are not?

You seem to be particularly interested in praying mantises. How do they choose partners?

With "our" green praying mantis, the male literally fears the female, and when she starts fixing him with her gaze, the male freezes. He knows that if he moves, he's in trouble. The female attacks him and the injury can be fatal.

So he knows what will happen to him?

He knows it and he doesn't want it. The male of the closely related black widow spider, Latrodectus hasselti, maintains a relatively safe distance from the female’s chelicerae (mouthparts) while mating with her. But he then does something crazy, which we call the suicidal somersault, when he flips over and literally offers himself to her. The female then decides whether to eat him or not. It has been discovered that if she ends up cannibalizing him, the copulation takes twice as long. Even more importantly, such females then have a significantly reduced or no interest in other partners. The sperm of this male who lost his life does not mix with the sperm of others and the chance of fathering offspring is much greater. We do not yet know how the female decides whether to eat the male or not. There seem to be no apparent phenotypic differences among the males. However this system can’t be applied to all cannibalistic species. For example, the female of our European garden spider (Araneus diadematus) will kill the male in 40% of cases even without copulation.

The interesting thing about praying mantises, as well as other species, is that they copulate even after biting off the male's head.

They even mate for much longer when the male is decapitated. I'm actually starting research of whether in these cases more sperm is transferred and whether paternity is more certain. We don't know that yet.

Has anything changed in this area through evolution?

In cannibalistic spiders, males have been shown to have relatively longer limbs in proportion to their bodies. This is because the male literally keeps the female away his body, as this can help save his life. This is probably a consequence of the female being cannibalistic.

How did you then get from studying animals to human behaviour?

While studying animal behaviour, I often came across citations about human behaviour. I started thinking about it and I thought, why not.

According to your research, women prefer men with a more masculine-looking face under certain environmental conditions. How does this work?

The research looked at why women in environments where survival is harder prefer men with more masculine facial features. We are talking about, for example, areas which are poorer or have more parasites. The closer to the equator, the greater the preference of both sexes for masculine traits. In men, this may be related to higher testosterone levels. In females, we concluded that more masculine-looking females might be more competitive and, in resource-scarce environments, this might be advantageous for their offspring. Therefore, in such inhospitable environments they are considered more attractive by men.

You also studied how women choose the height of their heels for a date.

At the time, this was the most read article in the Personality and Individual Differences journal. I took heel height as one of the sexual signals that is interesting to study because men just invest less in reproduction. Therefore, one would expect them to invest more in competing for women. And that’s really how it is. But this research shows that women also compete among themselves. It is interesting to find out why, from an evolutionary point of view. Offspring care lasts a relatively long time in humans and consequently males are also required to invest in it. Therefore, when competing for a quality partner, women use various signals - heels being one such example.

Lately, the Scientist of the Year award has being awarded alternately to scientists from Comenius University and the Slovak Academy of Sciences, sometimes from another university. In the last ten years, the award was given to four scientists from Comenius University: three from the Faculty of Mathematics, Physics and Informatics and now to you, from the Faculty of Natural Sciences. In the 25 years that the award has been presented, it was only given to one woman. What do you think this says about Slovak science or the support of women?

To be objective, the jury selects from nominations. So we’d need to find out whether there is a gender bias towards men among the nominees. If this was not happening, we could look for other causes. For example, that women invest much more in reproduction, pregnancy and childcare generally. Men are free to invest more in scientific research. It doesn't say anything about women being less capable scientists. I think they are just more busy with parenting. 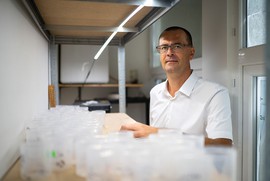 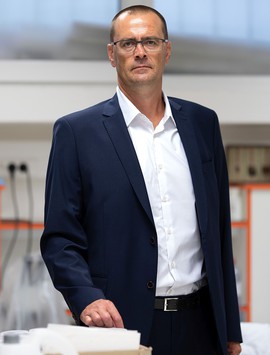