On June 25 of this year, a bright meteor appeared over southwestern Slovakia and was perfectly visible in the evening sky. Scientists from Comenius University in Bratislava announced that the first fragment has been found!

On June 25 of this year, a bright meteor appeared over southwestern Slovakia and was perfectly visible in the evening sky. Scientific cameras from European Fireball networks and from Slovak Central Observatory in Hurbanovo recorded the fireball as well and Pavel Spurný with his colleagues from Astronomical Institute of the Czech Academy of Sciences calculated the parameters of meteorite fall near Pusté Úlany. For several months the scientists, local people, and tourists were searching fragments of the meteorite, which was thought to have landed in the village of Pusté Úľany. Today, scientists from Comenius University in Bratislava announced that the first fragment has been found!

Then several groups of professional astronomers and geologists from Slovakia (Astromomical Institute SAV, Comenius University and others) were searching the predicted strew field with no success (see for example: Hľadanie meteoritu | Pusté Úľany | Meteorit pád 25. júna 2022 - YouTube). Finally, the meteorite was found by Mateusz Żmija, an astronomy enthusiast from Poland. On August 20 he discovered a small specimen weighing 8.6 grams, which was lying among the straw in a plowed field. He was very lucky, because the chance of finding the specimen after field work was very small. The finder took several photos of the meteorite and documented the place of discovery very precisely. Next, he drove with his finding to Bratislava and handed it over to scientists from the Faculty of Mathematics, Physics and Informatics Comenius University in Bratislava.

- When I found it, I could not believe my luck. I discovered a new meteorite for the first time in my life! I am proud that my find will help to learn more about space. It is a small specimen, but a great treasure for Slovak science. Now I cannot wait to see the meteorite again in the museum - said Żmija.

The specimen is currently undergoing a detailed analysis. For now, scientists have been able to confirm its authenticity and determine that it landed on the ground very recently. There are many indications that it is one of the stone meteorites called "chondrites", containing small stone spheres and grains of metal. But detail mineralogical analyses will determine the precise type of the meteorite.

Scientists are encouraging residents of Pusté Úľany to continue searching and donating their finds for analysis. There are definitely more meteorite fragments lying in the surrounding fields and in the village itself, which have not been found during previous expeditions.

It is worth remembering that meteorites found in Slovakia are the property of the state and should be handed over to local authorities or scientists. 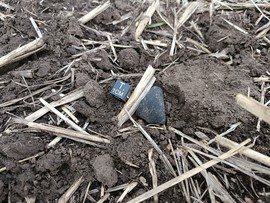