Comenius University (CU) earns 178th place in the worldwide RUR ranking in the area of teaching, making it into the TOP 500

Bratislava, 20 May 2022: In the 2022 Round University Ranking Comenius University Bratislava was ranked 426th. It is a slightly worse position than last year when it ranked 404th. Such year-on-year changes are common for universities from Central Europe. In the ranking, however, CU is still ranked the highest of all Slovak universities. Comenius University has regularly been ranked in the TOP 500 over the past decade.

Comenius University achieved its best ranking in the “teaching” dimension, earning the 178th place, which puts it in the “golden league”. This parameter evaluates the proportion of students and teachers, the number of bachelor's degrees or doctorates awarded per teacher and the overall reputation of the school.

The ranking is based on 20 indicators, which form 4 key areas of evaluation: teaching (40%), research (40%), international diversity (10%) and financial sustainability (10%). The ranking is published in partnership with Clarivate Analytics and draws from institutional information and bibliometric data from the Web of Science.

Comenius University is the only Slovak university to regularly appear in all major rankings. It currently ranks 630th in the CWUR. In the Shanghai ranking (ARWU), CU ranks 801st-900th, while in physics it ranks 301st-400th worldwide. It ranks 587th in the prestigious Best Global Universities ranking, while placing 244th in physics, 371st in geosciences and 485th in biology. In SCImago it ranks 573rd, and in QS World University Rankings it placed in the 651st-700th place band. In the NTU Ranking (National Taiwan University Rankings) it ranks 701st - 750th, but in the subject of physics it ranks 275th worldwide. In the Three University Missions (MosIUR) Ranking, it ranks 272nd, while THE Impact Rankings ranks it 601st - 800th and THE European Teaching Rankings ranks it 126th - 150th. THE WUR ranking places CU in the 1001st-1200th place band. 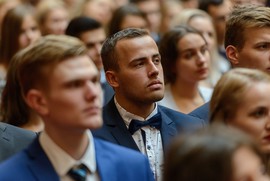