Bratislava, 11 June, 2021: This Wednesday, the 2022 QS World University Rankings were published and Comenius University ranked 651st - 700th. It has been rising in the rankings for the past two years, moving up 50 places from last year.

"Academic rankings are only an approximate measure of the quality of universities. They often include criteria which have little to do with the real quality of teaching or academic research. In this case, for instance, international surveys have a disproportionate weight. Publication activity covers the period of 2015 - 2019 while citations, 2015 - 2020. Therefore, it is more important to follow long-term trends, rather than the current ranking of an institution. In any case, we are pleased that our university has been rising for the second year in a row, gaining 100 places in two years. At the same time, we are happy to see four other Slovak research universities included among the one thousand top universities in the world,“ said Viera Štvrtinová, Vice-Rector for Quality Assurance at Comenius University. "It is a proof that Slovak secondary school alumni can obtain quality education at home, if they wish to," she added.

QS World University Rankings has been ranking universities since 2004 in partnership with Elsevier Analytics. This year, the rankings published a list of top 1,300 universities.

Comenius University ranks as the best and usually the only university from Slovakia in several reputable academic rankings which evaluate the quality of education and research. The Center for World University Ranking (CWUR) rankings were also recently published and put CU in place 609. The Round University Ranking ranks CU 404th in the world and THE Impact Rankings put it in places 301 - 400. In the Shanghai ranking, CU ranks 601st-700th. It ranks 572nd in the prestigious Best Global Universities ranking. In the NTU Ranking (National Taiwan University Ranking), it achieved significant success in the subject of physics when it placed 252nd worldwide in 2020. THE WUR rankings put CU at place 1001+. 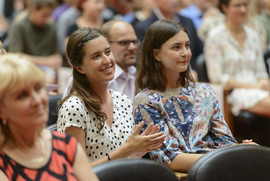