Bratislava, 21 November 2022: Following a tradition of the International Students' Day, the Rector of Comenius University presented awards to thirty students and thirty teachers. The ceremony took place in CU's Auditorium after a two-year pandemic-induced hiatus. The awards are accompanied by scholarships and other rewards.

An academic commendation of the University’s Rector is awarded to students for excellent performance of their academic duties, outstanding results in sports while representing the university, or for exemplary civic attitudes. One of the thirty exceptional students who received the award this year was Samuel Andrejčák, who studies of organic chemistry and helps organise events related to chemistry at primary and secondary schools, including, among others, Chemouk, Popchemol, the Chemistry Olympiad or Chemistry Charge.

Another recipient of the award was Tomáš Šišmiš, a student of general medicine, who founded the ‘Diabetes as a Lifestyle’ project and organises an event promoting the World Diabetes Day. He was also the leader of the Anti-tobacco project and the organiser of the ‘World No-Tobacco Day’ event and several campaigns to raise awareness of chronic obstructive pulmonary disease and bronchial asthma.

Michaela Pavuková, a student of citizenship education and history, received the award for representing the university. As the leader of the student start-up Nobill, she won in the „Environment and green technologies“ category of the 2022 Slovak University Startup Cup. Iryna Vizna, who studies therapeutic pedagogy, received the award for her volunteer work in which she used her knowledge of Ukrainian to support Ukrainian families by helping their children with developmental problems.

Sports coaching and physical education student, as well as senior world champion in fitness aerobatics, Kristína Juricová was another awardee, as was Eliška Mintálová who has long and successfully represented Slovakia in canoe slalom.

„International experience shows that it is no longer enough to just be a good student. That is a foundation, on which one must further build one's excellence, curiosity, individuality and creativity, because that is the path to new discoveries and knowledge. I am proud that our teachers create an inspiring environment at our university, in which all gifted students can grow professionally and personally,“ said the rector of Comenius University, Marek Števček. 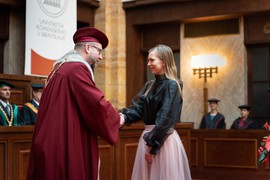 The rector of CU awarded 30 students. 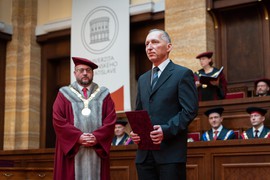 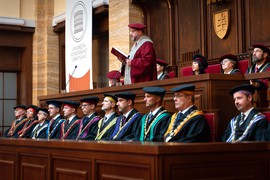