We participate in the Slovenská tepláreň project: Jana Kirschner and Para will perform in courtyard of Faculty of Arts

Bratislava, 21 November 2022: On 12 October 2022, Matúš Horváth, a student at our university, became the victim of an act of terrorism. Just like when Daniel Tupý was murdered seventeen years ago, we cannot remain silent when our students are confronted with violence and hatred. That is why we decided to join the project „Concert for Juraj and Matúš – Slovenská tepláreň“, named after the place where Matúš became a victim of hatred directed at LGBTI+ people.

As part of the Slovenská tepláreň project, Comenius University will support a concert of the most prominent Slovak singer Jana Kirschner and the popular Bratislava band Para. The event take place on Friday, 25 November 2022, in the courtyard of the Faculty of Arts of Comenius University on Gondova Street. The concerts will begin at 12:15 p.m. At 11 a.m., there will be an open discussion on LGBTI+ topics, moderated by Adela Vinczeová. Transgender model Liberty Simon, her mother Jana Šimonová, priest Father Peter and the dean of the Faculty of Arts Marián Zouhar will be on the discussion panel. The venue has a capacity of 200 and admission is free until capacity is reached.

„October of 2022 became one of the darkest months in the history of Comenius University. Four of our students died in the tragedies on Zochová and Zámocká streets. The most terrible thing about the death of Matúš is that he became a victim of hatred towards LGBTI+ people. Our task now is to do everything we can to eliminate these hateful expressions in our society. Students must feel safe at the university regardless of their sexual and gender identity,“said Marek Števček, Rector of Comenius University Bratislava.

The project „Concerts for Matúš and Juraj – Slovenská tepláreň“unites 355 art projects, 166 cultural and other venues, 45 festivals and supporting events and 47 entities which expressed their support, for a total of 613 participating performers and 199 events. The project is intended to express solidarity with the relatives and loved ones of Matúš and Juraj; to pay respect to those who made Tepláreň an open space where free people can meet; to express support for LGBTI+ people and show that Slovakia has the potential to become a country where everyone can feel safe and where members of minorities are accepted with respect and as a natural part of society. It also aims to stimulate legislative changes which will make it possible for all people in Slovakia, including LGBTI+, to lead fulfilling lives. The project promotes non-violence, togetherness and tolerance. It takes place between 12 and 27 November 2022 at various venues all over Slovakia. For more information visit www.SlovenskaTeplaren.sk. 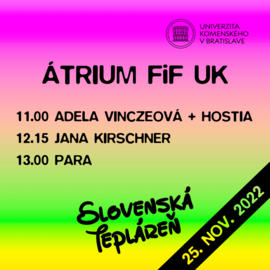