Bratislava, 23 November 2022: Today, Comenius University Bratislava awarded the title of Doctor honoris causa to Professor Joachim Neumann, a pharmacologist of international renown. The distinction is made in recognition of his discoveries of new, original pharmacological mechanisms while developing innovative methods of treatment of heart failure, as well as of his cooperation with Comenius University. The recipient of the honorary doctorate was nominated by the Faculty of Pharmacy in a year when the Faculty celebrates its 70th anniversary.

Joachim Neumann is currently Professor at the Martin Luther University in Halle-Wittenberg, where he leads the Institute for Pharmacology and Toxicology. He dedicated his research career to experimental pharmacology, focussing on heart damage and failure, and on the development of new molecules for the treatment of heart disease.

„Learning how basic pharmacology can help understand and treat heart disease has always been one of my interests,“ says Joachim Neumann. „In Münster I had the opportunity to work with Marek Matúš who was starting with hemodynamic measurements in transgenic mice, and who was soon joined by Ján Klimas,“ he says of the budding collaboration with experts from the Faculty of Pharmacy of Comenius University in 1992.

This cooperation resulted in the establishment of a team of Slovak researchers, who received his scientific guidance and education in his laboratories, and whose research careers he helped launch. Another reason why the faculty nominated him for the honorary doctorate was his work on such joint projects.

„Years ago, I had the good fortune to grow under the guidance of Professor Neumann as a postgraduate student and young assistant, and today I have the honor of working with him and with the Institute of Pharmacology and Toxicology that he leads, on further research projects,“ said Ján Klimas, Dean of the Faculty of Pharmacy at the award ceremony.

The Professor's rich body of research consisting of over 200 original, high-impact papers, also includes more than 20 highly-cited publications co-authored by students and staff of the Faculty of Pharmacy. 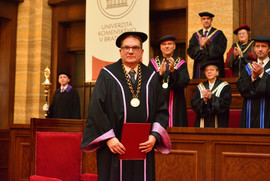 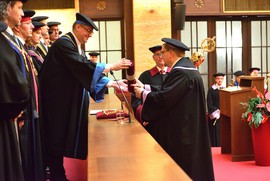