Bratislava, 13 October 2021: Today, Comenius University Bratislava hosted Kip S. Thorne, the Physics Nobel Prize laureate and internationally recognised expert on gravitational physics and astrophysics. At a ceremony in the historic Auditorium, the Rector of Comenius University Marek Števček presented the Great Gold Medal to the physicist in recognition of his crucial contributions to the LIGO detector and the observation of gravitational waves.

Professor Kip Thorne is an American physicist who studies relativistic stars, black holes and gravitational waves. In 2017, he was one of the three scientists who received the Nobel Prize for the first direct detection and observation of gravitational waves. He has also made a name for himself in the history of cinema as executive producer and scientific advisor to Christopher Nolan's Hollywood film Interstellar.

In his lecture entitled “My profound relationship with the warped universe: from black holes and wormholes to time travel and gravitational waves”, he summed up his research of gravitational waves, black holes, the warping of the universe, and the Big Bang. He also highlighted the work of several colleagues with whom he collaborated during his scientific career, such as his mentor and close ally John Wheeler, as well as Rainer Weiss, Ronald Drever and Barry Barish who were his team-mates on the LIGO project.

Professor Thorne works on the theory of “wormholes”, which could theoretically enable time travel in a warped universe. This theory may be a mere speculation at the moment but future could bring changes. "When I was a student, 59 years ago, we speculated a lot about the black holes and gravitational waves. Today we have observed the black holes, we have observed gravitational waves and we expect to see gravitational waves from the Big Bang soon. We doubt that wormholes exist and we doubt that backward time travel is possible. But in the future the gravitational waves will reveal in greater detail the warped side of the universe and then we might understand what we only speculated about fifty-nine years ago," said Professor Thorne.

The event was organised jointly by Comenius University Bratislava and ESET Foundation. 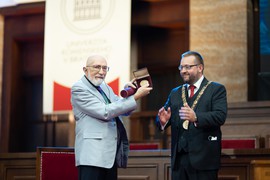