Bo Peng studies quantum computations performed by quantum vibration in crystals. Quantum technologies are a cutting-edge are. The problem is that the states of quantum systems are relatively fragile and are easily affected by the environment. Bo Peng discovered that in solids it is possible to manipulate the vibrational modes of a crystal. He found a way to generate quantum vibrations in crystals. "This theory could have enormous practical implications in computing," said member of the jury Professor Vladimír Bužek.

The jury decided to award two first places partly because no national round was held in Great Britain, and the two finalists of the Slovak round include both a representative of Slovakia and a student from a university in Great Britain. "We wanted to recognise quality, but at the same time we thought that the Slovak national round was held in order to give Slovak reserachers a chance to compare themselves to the rest of the world in Berlin," said the president of the competition, Professor Peter Moczo. "The breakthrough factor is an essential criterion which is met by both winners," he added.

The second place was won by Martin Muzelák who studies at the Technical University in Košice. He developed ways in which the MIDI technology, used mostly in the music industry, can also be applied in other disciplines, creating a universal digital tool for students, engineers and researchers.

Eva Rutšeková from Comenius University Bratislava entered a project which studies how historical experience is ignored and past mistakes repeated. She proposes for researchers in humanities and in social sciences to join forces and develop a curriculum of history combined with logic across all levels of education.

A jury of experts consisting of scientists from various disciplines reviewed all entries and chose the winners. Falling Walls Lab Slovakia is a part of a worldwide format that gives recognition to exceptional projects of young innovators from various disciplines of science. On 7 November 2022, the winners of Falling Walls Lab Slovakia 2022 will represent Slovakia at the international Finale as "Emerging Talents", among 100 participants from the whole world. They will present their research, initiative or business model in front of a jury made up of scientists, innovators and business representatives. The winner will receive "The Breakthrough Winner" award, a financial prize and above all the opportunity to present their entry on the main stage of the prestigious Falling Walls Conference which takes place on 9 November 2022 in Berlin. 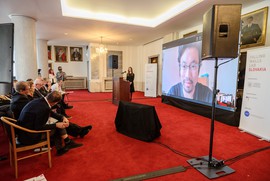 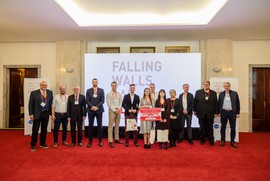 Finalists of the Slovak Falling Walls Lab final with members of the jury. Photo: Vladimír Kuric